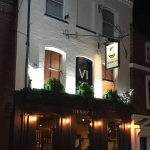 A note to fellow musicians. Think carefully before you approach or accept a gig from here.

Following a noise complaint from a previous band - 2 weeks ago I might add - we arrived to be told that we had to keep the noise down and finish on time.

Common sense would have suggested that the landlord contact us about this situation prior to us arriving whereby we would have planned things differently i.e. the drummer would have brought his electric kit and we would have all gone through the pa. Sadly common sense was lacking so we arrived as normal.

We did all we could to keep the noise to a minimum, short of turning ourselves into a mime act. At the interval we approached the landlord to say we'll keep trying but there are limits but his rude response to that convinced us to pack up and leave - with quite a number of the people in the pub which was quite amusing. We met quite a few of them in the Old Ticket Hall and had a great evening :)

So, in conclusion, heed my warning. It's a great pub but unless things change we won't be back there