The Ashburton Arts Centre is a great venue, slightly eccentric , wonderfully atmospheric with great acoustic. The last Monday of every month it hosts the Not Only But Also The Blues Club (contac mary.caffrey@gmail.com).

Last night The Adam Sweet Band headlined. What a show. The band consisted of Gary Kroll (drums), Ian Jennings (bass) and Adam Sweet (Guitars and vocals). From the first chord, I was hooked. The small audience, probably reduced by the day's Covid news, did their best to raise the roof in appreciation.

They began with three upbeat numbers, dispelling the damp gloom of a Dartmoor winter's night and warming up the chilly audience as well as themselves.

They played a tight set, an hour or so. A short introduction and into each number. No faffing about, pros who work perfectly together. And those in the well of the hall swept along in the joy of it.

Adam included several songs from his own songbook "Working On It" the first track from the "Sink or Swim" album, also "Something 'll Happen". I should have taken notes

"Evening" (Royce Swain) - from "At Times Like This" album- one was a tour de force with an amazing solo on a semi acoustic guitar. A great song. It brought to mind the seventies band "Free", packed with emotion and delivered with panache

A tribute to Peter Green, three songs run together including "Green Manalishi" and "Oh Well", the latter with a false ending that caught us all out: Masterful. Marvelous solos and some incredible bass work from Ian Jennings and all driven by Kroll's crisp work at the back.

The hour ran out and we were treated to an encore.

When he or they come your way get along. Essential Listening, the recordings are great, but live...another level.

Cheers Bill! Thanks so much for this fab review. It's always a pleasure to see you at one of our shows. Hope it's not too long till the next one...

Didn't see you at Blandford but you were great!! at the Fox inn in Ansty Dorset Friday and Saturday. We want to know if your back this way ... Thanks

Thank you so much…it was great to meet you. The next one in Blandford is the 9th July…maybe see you there! 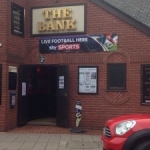 Going to see Adam Sweet play is never disappointing and this performance saw yet another display of his more than abundant guitar and vocal talent which is evident from the moment he takes to the stage.

With a style heavily influenced by the classic rock and blues music of the 60's and 70's Adam delivered a well rounded set, complete with anecdotes and audience requests. His highly original approach to classic covers such as Stevie Ray Vaughan's "Pride and Joy" and "The Green Manalishi" by Peter Green were rendered to his usual note perfect standard alongside many self-penned originals showcasing intricate, energetic solos and catchy riffs, as a perfectly enticing prelude to the appearance of his new album!

If you get the chance see Adam play then I would definitely recommend you take it. Everyone that I have taken to see him (Including some friends from Germany) has been highly impressed by him. He is a true artist and an inspiration to those wanting to follow a similar path: a definite must-see!

Bradninch Cricket Club was treated to a full range of songs and styles from Adam Sweet, from the well known to the original with tracks from his excellent EP, "I Work Alone", "You Think You're Lonely" and "Doing Alright" to performances of "Walk in My Shadow" by Free, Thin Lizzy's "Don't Believe a Word" and "Money" by Pink Floyd. If that were not enough, he also included a special interpretation of Motorhead's "Ace of Spades as well as making room for David Bowie's "Jean Genie" and "Black Dog" by Led Zeppelin as well as many others!

Those that came along on such a dreadful night weather wise were more than impressed with both the quality of Adam's musicianship and his extensive repertoire, with all the while Adam's interaction and sense of humour keeping his audience well tuned in.

The venue could well have taken in more people but because it wasn't fully packed, there was adequate room to accommodate those who, captivated by such a wonderful performance, felt moved to dance to some of the tracks, and as Adam switched effortlessly between his own tracks and the cover versions he performed, it was difficult to spot the difference to the untrained ear!

Adam is a true professional, who makes the most of his opportunity to impress and we already look forward to his next performance!

Cheers Simon, was a pleasure to come and play for you...lets hope next time it's not on such a grim evening!! Looking forward to seeing you all again soon.

Adam Sweet at the Bakewell Acoustic Music Festival - the outstanding artist of the weekend for me. I've been around a lotta years & seen a lot of people perform, but never someone who filled a stage and a venue the way Adam does - the sound was awesome. His tribute to Peter Green, Green Manalishi can only be described as epic! I was first in the queue to buy his EP and look forward to the day I'll inevitably say "Adam Sweet? Saw him at a festival in 2012, he was awesome even then. Don't take my word for it, go see him and get converted :-))