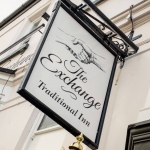 The first time I heard this group was at the Wolf pack party at Forde hall Newton Abbott. I thought they were brilliant.Then I heard they were coming to Ivybridge where I live. I just wish I could have got there earlier.Brillant selection of music played spot on . The old 74yr old dancer Frank.

Thank you Frank for taking the time to write a review, it's much appreciated! Hope to see you at a gig again soon.

Another cracking performance from a top band playing top music.A big thankyou to you all.

Hi Andy, Thank you very much for taking the time to write this, its very much appreciated. We always enjoy playing at Montacute, its a great venue and we really like the friendly atmosphere. Hope to be back before too long. All the best! 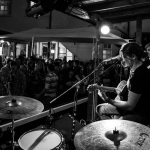 It was really good to see and hear Audius Maximus' keyboard player back: he definitely gives the band's sound more depth. To be fair, they were good without him but even better with him!

A big thank you to the band for playing 'Alright Now' for our wedding anniversary: it was a hit when we met and we got married almost exactly 2 years later so you can work out how long ago that was -eons!. (It always feels like our song.)

Particular highlights of the night for us were two Queen numbers: 'Fat Bottomed Girls' and 'The Show Must Go On', which were played very well and made good additions to the band's repertoire as well as an excellent rendition of 'Juke Box Hero'. (Please, please would you consider adding 'Whole Lotta Love' to your set list?)

We wondered if Les was trying to work out an exchange programme with Spike from Diamondogz! We noticed he kept playing a bit of 'Jeepster',(one of the songs they do) and Spike keeps making the Dogz do 'Paranoid' which is much more up your street! (Could be interesting!)

A Brilliant night, as always. Thanks guys.

Thanks Sue, it's always good to see you both at our gigs.

I'll have a word with Les - we've caught him playing "Apache" recently too.....

What a great night best band we have heard in a long time. A band not to be missed well worth seeing fantastic.

Thanks Cherrie & Stuart - that's good of you to say!

Great music,great band and what a great night hope to you again soon at montacute w.m.c.

Thanks Neil, we all really enjoyed it too.