I had Basher Tate for my birthday in January and was so impressed that I just had to go and see them again when they were doing the gig at the local club... If you enjoy a dance and are up for some serious fun they just cant be beat. Thanks for a great night and I will be looking out for another chance to get down to the groove soon. lol.

Basher Tate played at the landsdown in Dawlish 05/02/2010 and took some friends along who had not seen them before, Bums did not touch seats from the moment the band started!!! What a set! New songs to keep it fresh too!! keep it up Basher, you rock!!!! 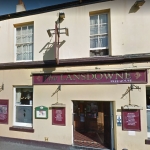 I took some friends along who had not seen them before, bums did not touch seats from the moment the band started!

One of my friends is a singer in her own right so knows a little bit about these things. She commented on how tight and together the band is. So praise indeed from a fellow musician!

The band's confidence continues to grow, they have their cheeky moments which keeps the whole evening moving along and adds to the entertainment!

So looking forward to the next gig to see what new song or songs they have decide to add to the set as so often they are better than the original!

What a set! New songs to keep it fresh too! Keep it up Basher, you rock!

We just wanted to thank you all for helping make our wedding so enjoyable! You were absolutely fantastic and everyone had a ball! We have been recommending Basher Tate left right and centre and will continue to do so - the priceless memories of those inflatable air guitars will stay with us (and most of our guests!) for years!

We had a ball too - thanks. Basher Tate.

We booked Basher Tate to play at our wedding reception in December and to say they were absolutely fantastic would be an understatement!

From the moment they kicked off with our first dance it was clear it was going to be a fun filled evening - a great playlist performed to perfection had everyone up and the dancefloor was packed all night! It was fantastic to see all of our nearest and dearest having such fun - a particular highlight were the blow up air guitars, we never thought we'd see our grandparents rocking out to songs like Brown Eyed Girl and Disco 2000!

Extremely professional and communicative in the run up to the wedding, everything was catered for before the big day and their flexibility meant that our reception was timed the way we wanted it - even when the speeches ran a bit late there wasn't a grumble to be heard!

Another great touch was that the band took the time and made the effort to learn a song of our choice for our first dance (Romeo and Juliet by Dire Straits) - this was the icing on the (wedding) cake for us!

Book this band - you won't regret it!

We had a blast - thanks for booking us. Basher.