Hey guys thanks for an excellent night you have a great sound you were all awesome, if anyone is reading this you MUST go and checkout this band ALRIGHT !!!!!!!!!!! Del carnaby street

Now that is praise indeed - thanks for the support Des. 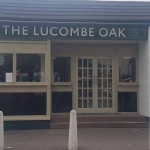 I'm pretty sure a fantastic night was had by everyone at the Longbrooke on Saturday.

As a whole Basher Tate are an astounding band, outshone only by the remarkable vocal talents of their lead singer, (the good looking short guy in the hat and shades).

They rocked their way through a incredible set list with pretty much something for everyone. Personally I enjoyed disco 2000, song 2, I predict a riot, ruby and are you gonna go my way.

There was a great atmosphere from the off and the band kept the dance floor full most of the night.

I look forward to seeing them again and would strongly recommend Basher Tate to anyone.

This was the 2nd time I have seen these guys and they were even better this time round.

Musically and vocally, they are awesome. They have a great mix of songs and they perform them all superbly. Baby I don't care & Does your Mother know are personal favorites and for me they totally nailed these songs.

There was a great atmosphere and energy from start to finish. The dancers took to the floor very early on and remained with them right till the end.

I would highly recommend Basher Tate for any function and can't wait to see them again.

Promoters, Publicans, Everybody. Take note. This is the band to see/book, new kids on the block maybe but awesome and a great selection of songs. Check out this band while you can because they are going to be very busy.

Lovely group, great people, fantastic atmosphere! They made people dance within a couple of minutes and kept them dancing for a couple of hours! I wouldn't hesitate recommending this band to anyone who wants to have a great time!