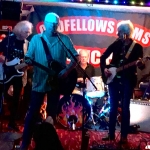 Ever since I heard that Chris Hargrave had started up a new band after lockdown, from the ashes of the fabulous Bluerays, I had been waiting to see them.

So I was delighted when they were booked to appear at the lovely Beehive pub in Little Bury Street not to far from my home.

Chris never disappoints and this new outfit are absolutely outstanding. They are four talented musicians, with bucket loads of experience, who really know the music of the sixties and seventies.

Chris is main lead vocalist with the band and is as enthusiastic as ever as the band power through rock 'n roll classics like Dale Hawkins' Susie Q, Ry Cooder's Little Sister and Frankie Ford's Sea Cruise.

And boy did the Beehive audience love them. This was the first time I had seen dancers in a pub right from the very first song.

It helps greatly in a pub band when you can rely on two other band members to take on lead vocals (and do it superbly).

Free Electric Band singer/guitarist and ex-Bruvver John Clare is not only a terrific lead guitarist but he has a lovely tuneful voice -- as he showed on the gentler numbers including Badfinger's Day After Day; Neil Young's Long May You Run and the Beatles' little-known gem I Need You.

It is so nice too that the band are highly selective in their choice of material. How many groups perform Manfred Mann's joyous number Pretty Flamingo; Chris Isaak's plaintive Wicked Game (with John's excellent guitar work) or the raunchy Tina Turner smash Steamy Windows? This featured the third of the band's vocalists, the multi-talented Andrew Heart, who has worked with Billy Idol and Sir Bob Geldof, among others.

Completing the line-up at the Beehive was drummer Les Cole who demonstrated his talent throughout the night particularly on the Who's 1966 rousing rocker Substitute.

Other 'unusual' numbers during the second hour-long set were Mike D'Abo's plaintive Handbags And Gladrags; and the Dave Edmunds rocker Ju Ju Man.

A total of 28 songs, ending with the Barrett Strong/Beatles classic Money Money (That's What I Want). I want to see more of the Latest Flames, one of the best bands on the pub/club circuit.

And, just as a PS, it was also great to see Stephen Pomeroy, former Bluerays members, enjoying the band's performance at the Bush Hill Park pub.

Thank you for such a great review Colin, you are too kind. (Was the cheque enough?)😁 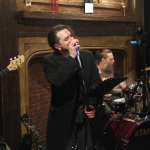 Fabulous sounds for everyone. i rocked til i dropped...... but unfortunately had to leave early. thank you so much boys!! i shall definitely see you guys again. thanks for making my easter night out worth it!! x x x x christina the rock chick, southgate.

Fabulous sounds for everyone. i rocked til i dropped...... but unfortunately had to leave early. thank you boys!! i shall definitely see you guys again. thanks for making my easter night out worth it!! x x christina, southgate.

A good variation of tracks with some welcome more obscure numbers which made the gig extra special. 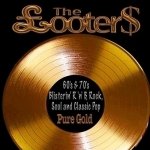 The Looters on Saturday 21 November 2015

Well done guys for another great night of blues, rock and pop. I will save a full review when I see the five regular Looters in action but congratulations to Dave and Ollie for filling in so well for Steve Oakman and Jim Russell. I particularly liked the funky version of Bill Withers' Use Me' the Johnny Cash medley; and the reggae version of John Denver's Leaving On A Jet Plane. I look forward to seeing the band in all their full glory soon.

Thursday 26 November 2015
Write a gig review for The Beehive »