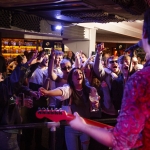 Bang, what a night The Lord John Band on Friday 9 August 2019

We were delighted to have The Lord John Band play on behalf of the Riseley Live Music Cartel at the Bull in Riseley. Let me tell you they did not disappoint, what a great gig, what a great night. The pub was rammed, the pub was rocking, the peasants were bopping. Fabulous night guys, thank you so much, thoroughly recommend you to all and sundry and look forward to booking you again next year.

The Firm @ The Bull At Riseley, Riseley

I hired these guys for a private gig in Portsmouth after witnessing their talent in a pub (yes a pub!, you’ll know what I mean when you see ‘em).

They’re intricate, tight, and if you love live music performed with quality, this is the band for you.

They ain’t an ordinary pub band, trust me.

Second gig for the cartel who try promote live music in The Bull at Riseley.

The Firm are a fantastic band. These chaps are the most massively talented musicians, it’s staggering that they play in pubs. Excellent set list with some great surprises.

Enough banter to be entertaining but the standard of playing is very special.