Thank you "The Spree" for a great night of entertainment. It was the first time you played at The Buntingford Social Club but it defiantly will not be the last. You had us tapping our feet from the start and many were up dancing all night. We look forward to you entertaining us again soon.

Thanks. We had great night.

Looking forward to the return. 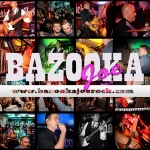 We saw Bazooka Joe at the Buntingford Social Club last Saturday, and they rocked. Great covers of classic songs by bands like The Who, Queen and Thin Lizzy, they put on a fantastic show and the crowd had a ball. We particularly enjoyed dancing to 'Place your hands' by Reef.

They are all accomplished musicians and their sound was great. The guitarist was amazing, even playing a mandolin for REM's 'Losing my Religion'. It was also really great to see a band with keyboards in as well.

We look forward to seeing Bazooka Joe again when they next play in the Hertfordshire region.