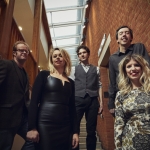 Fred’s House are an award-winning band based in Cambridge. They make summery, 70’s West Coast inspired folk/rock but have their own distinctively fresh sound that is very much part of now. This group of musicians have the rare ability to sweep you away with their gorgeous harmonies, moving lyrics, infectious melodies and uplifting grooves. Among their many influences are the likes of Fleetwood Mac, Lissie and Janice Joplin.

Since forming in the home studio of producer Fred Cox in 2010 (hence the name), been creating quite a stir on the live circuit with their reputation for their stunning and energetic shows going before them. Fred’s House have won many awards; Audience Choice for BandApp 2013, ‘Best Folk/Roots Band’ and ‘Audience Choice Award’ NMG Awards 2013, the prestigious ‘Syd Barrett Pride of Cambridge Award’ at the NMG Awards 2017 and the ‘Best Folk/Roots Band’ at the NMG Awards 2018. They have released 3 albums to critical acclaim Bonnie and Clyde (2014) Faultlines (2016) and Careless (2018), and latest EP Walls and Ceilings (2020) grabbing 4 and 5 star reviews across the board as well as emphatic press.

Festival appearances include Cambridge Folk Festival, Bestival, Acoustic Festival of Britain among many others. In 2017 the band embarked on a 13 date tour of China as part of the ‘Nanjing International Music Festival’ playing 1000 plus capacity venues. The band have been main support for the likes of Eddi Reader, The Wonderstuff, The Shires, Phil Beer (Show of Hands), Ward Thomas and many more. Fred’s House have been heard on BBC 6Music as played by Tom Robinson, Amazing Radio, BBC Radio Wales, and many BBC stations across the UK as well as having been invited to perform live for BBC Introducing and Radio 2 DJ Bob Harris’ Under the Apple Tree sessions.

Fronting the band is Vikki Gavin, a classically trained vocalist, who started the band with former member and singer-songwriter Griff Jameson. Fred’s House was born when the pair moved to Cambridge in 2010 and joined forces with their funky dancing bassist Gafyn Jameson and songwriter and guitarist Lachlan Golder. Later in 2013 Cambridge legend Paul Richards, aka ‘The Happiest Drummer’, recorded on their debut album and then never left. Band politics and relationship breakdowns lead to Griff leaving the band after 8 years. Since 2019 violin and vocalist Prue Ward joins the line-up and gives a fresh new spin to their staple sound. Fred’s House are busy writing and recording new material for their 4th album at North Acre Recording Studio and getting back to a busy gigging schedule after a long awaited pause during the pandemic.

“Isn’t that lovely stuff. They have a whole new sound and one that I really love!” Baylen Leonard (BBC Radio 2 / Country Hits Radio)

Tickets available from Duncan at biggingertommusic@gma