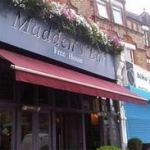 Some bands working the pub circuit simply go through the motions every weekend playing two sets of music in virtually the same order every time. They have little rapport with their audiences and take a long interval between sets.

At the other end of the spectrum there are bands like the Sound Of The Suburb. Here are five guys who work their socks off, look as if they are having a great time and have great rapport with pubgoers.

And what a joy they are to watch. Firstly, SOTS look like a professional band -- all dressed in black shirts with matching flame red ties. Their lighting effects are outstanding and well above the average standard. And, most importantly, they work really hard.

SOTS have a great front man in David Maraney, a larger-than-life character who exudes charm and personality. David encourages the audience to dance and chats to them regularly between songs.

Behind David are four hugely talented musicians. Chris Berlingieri, on lead guitar, looks like he's having a great time; while keyboards man Mike Shilling, bass player Steve Phillips and new drummer Paul Steedman are all highly skilled musicians who are adept at recreating the sound on hit records.

At Maddens in East Finchley (the place where it all began for this band), where I saw them, the quintet performed a back-breaking three sets. They kicked off the first set with Stealer's Wheels' catchy Stuck In The Middle With You and a novel interpretation of the Easybeats' 1967 rocker Friday On My Mind.

There was a whole lotta soul in the first set -- with favourites like Mustang Sally, Soul Man and Martha Reeves and the Vandellas' Heatwave. And it was nice (and highly unusual) to see dancers at such an early stage of the evening. The band were even brave enough to perform one of their own songs -- C'Mon C'Mon, from their album Still Waiting.

No long breaks here and ten minutes later the five of them were back on stage with two Chris Isaak classics Wicked Game and Blue Hotel.

A stomping version of the Surfaris' instrumental Wipe Out (featuring drummer Paul) led into a feast of rock 'n roll which had the dancefloor packed. Classic after classic followed with Runaway, That's Alright Mama, Tutti Frutti, The Wanderer, Great Balls Of Fire and the Stray Cats' Rock This Town. The joint was jumping for a whole set.

Such attention to detail is paid by Sound Of The Suburb that they even have a change of costumes between sets.

And ten minutes later they were bounding on stage again with their own interpretation of Cher's sixties' success Bang Bang (with great vocals from David). The band then embarked on a seventies' sojourn with pounders like the Sweet's glam rock smash Ballroom Blitz; the Bowie double of Jean Genie and Rebel Rebel; and the Clash's punkers Should I Stay Or Should I Go and London's Calling.

SOTS did an encore of the Rolling Stones' Honky Tonk Woman but I'm sure the Maddens' crowd would have been happy if they had done a fourth and fifth set.

But, by now, after nearly three and a half hours, the band probably needed a rest (or a long lie down in a dark room).

A cracking evening from a cracking band of musicians.

Thursday 28 September 2017
Reply from Sound Of The Suburb:

Thank you so much Colin, we really appreciate this great review. We very much look forward to seeing you and your wife again soon. Best wishes, David, Chris, Steve, Mike and Paul.