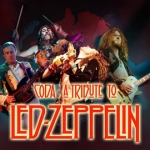 CODA - a Tribute to Led Zeppelin are Europe's most authentic and exciting Led Zeppelin tribute band, replicating the power, excitement and magic of a Led Zeppelin show like no other. They are the only proper four-piece Zep tribute band in Europe that looks and sounds as close to the real thing as possible, featuring authentic-looking and sounding instruments as well as incredible, hand- made replica costumes that will take you back to the time when the Gods of Rock ruled the world!

Every show features a fantastic selection from classic Led Zeppelin songs such as Whole Lotta Love, Stairway to Heaven, Rock and Roll, Black Dog, as well as Led Zeppelin live rarities such as When the Levee Breaks, Ramble On, Wanton Song and much more. The band can also perform a wide variety of Led Zeppelin's acoustic songs such as Going to California and That's the Way and every year CODA add more and more new songs to their repertoire. CODA's show takes it's inspiration from the studio recordings, as well as official (and unofficial!) live recordings to bring you the best of all facets of Led Zeppelin.

Formed by four musicians with a love of, and dedication to, the music of Led Zeppelin, this is no parody or ego trip, just an honest and true representation of the music of the greatest rock band ever, Led Zeppelin, performed live on stage with no tricks, backing tracks or safety net!

In 2018 CODA perfomed a series of three very special shows, including playing at the very first venue Led Zeppelin ever played, exactly 50 years to the day! These shows were received to great praise by hundreds of Led Zeppelin fans, including many who were there at the very beginning:

“The fabulous Zeppelin tribute band CODA from England marked on Friday Led Zeppelin's 50 years with a fabulous concert in the resurrected teen club...CODA were amazing. The same hair, same poses and same costumes...The more than 400 in the chamber had an experience and clearly expressed their enthusiasm. A worthy mark of the 50 years.”

who captured the spirit of the legendary group perfectly.”

No previous gigs listed.
Export gigs as an iCalendar (.ics) file for Apple, Google or Yahoo Calendars.Note: some iCalendar implementations incorrectly cache your calendar. To prevent old calendars showing on other sites or apps, replace the URL in your diary site or app with the URL shown - this URL changes when your calendar content changes, so your feed will always be up to date if you always manually replace the URL.
Export gigs as a CSV file for OpenOffice Calc, Microsoft Excel or other spreadsheet.
We use only essential cookies.
Info »
We use only essential cookies.
Info »