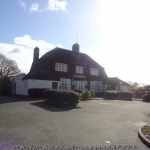 The pub became the Rocking Shy horse last night with the Copperhead Jacks blasting out Rock n Blues classics at an appreciative audience! One guy at his anniversary dinner asked to get up and do a number with the band, the Jacks agreed and played a Rock n Role rendition of " Hound dog" with their special guest singer, which further brought the house down. The singer Tony was in especially good voice and delivered again and again on diverse number from THE WHO to BLACK CROWES , even the guitarist stopped to clap Tony singing TALKS TO ANGELS!. A really good night was had by all and Micks drumming was as usual inspired and knitted the Bass and guitar together perfectly. If I wasnt in the band I would defo go see them live !

The Band thanks you, they were especially impressed by the bands review being written by an impartial observer, or guitarist

The Jacks hit the historic ST MORITZ club in London's West End on Friday and brought it back to its heyday of the late 69s with Hendrix and the Who ,Rory Gallagher and CREAM numbers blasting around the cavernous walls like was heard back in the late 60s early 70s! The tight hard hitting unit gave voice to classic numbers from Rock Royalty in a manner that hasnt been heard since the glory days of 1969. If you want to hear what it was like when Eric and Jimi and Pete and Rory trod the stage, catch the Jacks at their loud and bluesy best next chance you get.

Thanks a lot for your review, glad you had a good time and thank you to the other bands playing who said nice things about us! It was really appreciated !