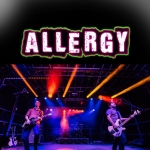 On The Button Allergy on Friday 9 March 2012

I've seen this band advertised around and heard good things about them, so as they were at my local I thought I would take a look? The place was packed, although I must admit the faces were not familiar, so the band must pull a fair old crowd in from afar, which is always an encouraging sign.

The first impression I got on seeing the set-up was excellent. Good gear! (Anyone who use Gibsons must be good!) They also had decent lights etc. and managed to get the sound/balance spot on, which is not always an easy thing to accomplish.

Although, to be honest, I didn't know many of the songs that were played, I still enjoyed 'em! The ones I did know: "Cars" by Gary Numan, REM's "It's The End of the World As We Know It", and (one of my favs) "Buddy Holly" by Weezer were great!

These guys certainly displayed tons of energy and played straight through without taking a break, whipping the crowd into continual dance mode clearly demonstrating how much they were enjoying themselves.

On the downside, I didn't really care for the drummer banging away between songs. There was also a lack of engaging 'chat' too - but hey - that's a minor criticism when you consider the overall performance, which was great.

Thanks Terry. We love playing at the Crown. It's always a good crowd down there.

Good points you raise there. Bom, the drummer, has his very own fan club at the Crown, so his banging away between songs is to please his fans! 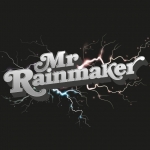 I haven't seen this band for at least ten years and they were good then so I was looking forward to seeing how they performed at The Crown. The first thing I noticed was that th equipment was all top notch stuff - no duff brands with this lot!

They kicked off with Bad company's "Feel like making love" and the sound was well balanced and full with a nice smooth bass. You can tell these guys enjoy playing together: it comes across with smiles on their faces all night! They had the audience smiling all night too at their antics, especially at those times the band invited the odd guest to get up on stage and join them to have a go!

Mr Rainmaker are a tight unit: the drummer was good and solid; the bass warm and the vocals were spot on as were the harmonies. The lead guitarist/keyboard player was brilliant showing great versatility in sometimes playing lead and keyboards at the same time! Nice one.

It was also good to see a band do some 'different' songs for once with numbers from U2 and - dare I say it - "Baggy Trousers!" They even managed to make "A Town Like Malice" sound good!

Well done lads we enjoyed every second. My advice: go and see this band and see what a good band should be like! 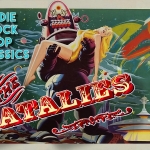 Some different songs? The Natalies on Friday 13 May 2011

I thought I'd pop over to The Crown and see this band, as Ive seen their name around a lot. They were crammed in a corner of the venue but in spite of the lack of room still somehow managed to perform!

They started with 'Bohemian Like You', which I hadn't heard for years. Nice one! The selection of songs played, whilst varied, didn't always 'suit' the band, but that's only my opinion.

'Come Together' was cool and when they started 'Don't Fear the Reaper I was expecting a treat on the guitar, but when it got to that point in the song they suddenly swung into (if I remember rightly) Katrina and the Waves! I have to admit I did wonder what all that was about. This 'merging' from one song into another happened a few times and, in my opinion, spoilt what I believe would have been a better gig if they had performed some numbers more completely.

The sound balance was ok, with the exception of the keyboards, which were a tad on the loud side compared to the other guys, in spite of being well played.

When all is said and done, this lot are good entertainment and worth a look, but I honestly believe the overall performance would have benefited by more numbers being given a more 'complete' airing.

Thanks for the review! We like to doff our cap to an assortment musical styles and its always been a facet of our gigs, and also a point of difference, to keep the set moving and occasionally segue from one song to another, irrespective of the differences between artists and genres. Generally this helps to keep things interesting and hopefully keeps people dancing! Like many bands our set may encompass 45-50 songs and its a given that not everyone is going to love all of them.

We always appreciate constructive criticism and glad you enjoyed the evening.

I originally heard of this band about 3 years ago, but this is the first opportunity I have had to see them and I certainly wasn't disappointed. I have always liked a fair degree of Indie, so was very impressed by their renditions of "Birdhouse In Your Soul" (TMBG) and Chasing Cars (Snow Patrol), but also admired the way they could switch with ease to the punkier White Wedding (Billy Idol) or more traditional Blink-182/Green Day. However I think the highlight for me was their version of Tubeway Army's "Cars" without even a keyboard in sight! I look forward to at some time hearing their versions of Kraftwerk's "The Model" and the 'punked' version of Kate Bush's "Wuthering Heights". If you like Indie, I'm sure you will like these guys too!

Thanks Cliff. It's always a pleasure to play here; the crowd really seem to appreciate it's music. Next time we'll throw in some more surprises. See you then.

The Scallywags @ The Crown, Aston End 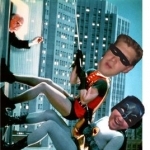 Scallywags Impress The Locals The Scallywags on Saturday 4 December 2010

It is just over a month since their last visit to Stevenage (Hogs in the Town) and they played a very much smaller venue much closer to home. This was long-awaited by me, having only heard the last 4 numbers from the previous gig, and although the crowd was smaller, their appreciation was no different and some were particularly impressed. The band have a very laid-back 'melancholic' sound for many of their covers from Dylan's "Like A Rollin Stone", to the Killers' "Human", but they are not afraid to push the boundaries with a bit more edge for example the Boomtown Rats & The Pogues, and their rendition of "Fairytale Of New York" was an innovative inspiration (considering I am a Kirsty MacColl fan and not so much of the Pogues). These guys will definitely get your feet tapping and they don't just confine themselves to the stage so be prepared for a fun night! Forget 'Strictly', 'X-Factor' & 'I'm A Celeb' - these guys ARE the REAL thing. If you are planning to see any band, put the Scallywags at the top of your list.

Sunday 5 December 2010
Reply from The Scallywags:

thanks so much for the continued support...we had a lovelly time at The Crown and can't wait to go back there in the new year xx