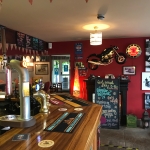 If this is a pub band I am a Monkey The Dashwood Arms, West Wycombe on Saturday 19 January 2019

Cry Wolf are a good sized notch up from your average pub band, no up from the better than average pub band. The range of music, the harmonies, especially from the drummer are outstanding. For me it is great to hear songs that are beyond the repertoire of the regular pub bands, they cover the standards (Smoke on the Water, Paranoid....)

but the highlights for me were Runnin With the Devil, Alive and Missing You. A UFO track was a rare treat. We will definitely keep an eye on Lemonrock to make sure we see you again. Thank You.

Good to see that the old Radio 1 DJ Gary Davis has finally found some music taste. 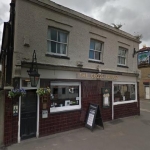 The Cross Lances, Hounslow on Saturday 21 May 2016

Wondered if things would be as good without Pars on guitar. ..Gary was amazing. ...brilliant gig

A storming three hours passed in the company of the finest heavy rock covers band, Cry Wolf, inside the cosy, heaving, gyrating, Halloween-themed and alcohol sated Henry VI on the special occasion of landlord Tony's birthday, as the tightly honed, energetic but raw precision of four musicians - at the top of their game - appealed to appreciative die hard Rock fans plus costumed Draculas and vamps alike, as well as converting young drinkers into head-banging Hooray Henrys and tottering high-heeled Henriettas!

After announcing their presence with Rolling Stones' "Start Me Up" the wolf pack slipped easily into Bad Company's "Feel Like Making Love", containing the first of lead guitarist Pars Evrenos's sensational solos, quickly followed by another astounding array of axe work during Kravitz's "Always On The Run" and I remember thinking, 'Music this brilliant is more than we have the right to expect for free!'

Nothing else mattered as rhythm guitarist Gary Farmer took lead vocals in Metallica's number of almost the same name and again for The Cult's "Sweet Soul Sister," in which he was particularly captivating as his dopamine releasing effort was embellished by Pars's notable solo on his Ibanez.

On alternate songs, such as "Hush" and "Come Together", older brother and bassist, Tom Farmer, sang lead vocals while every tune contained skillful harmonising, including Metal linguistics from Tom's twin, David - on drums - who stretched into a stick solo to finish an animated version of AC/DC classic, "Highway to Hell". 'Animal' knocked the spots off Leppard's original before "Gimme All Your Lovin'" showcased a further fret board master class, climaxing the first set.

Returning from a fag break the band immediately recaptured audience attention with a fine performance of Pink Floyd's iconic "Comfortably Numb"- its epic solo handled superbly by Pars, after which Nickelback's "How You Remind Me" and UFO's "Doctor, Doctor" sent the crowd into a head shaking frenzy maintained by the striking Van Halen classic, "Running With The Devil".

The aptly titled "Living After Midnight" cleared the flight path for the killer riff of Kravitz's "Are You Gonna Go My Way" followed by the lesser known "Word Up" by Cameo, while a thumping rendition of Judas Priest's "Breaking The Law" ramped up the dancing and head-banging before a wonderful medley comprising "Voodoo Chile", "Whole Lotta Love" and "Purple Haze" shook the ancient hostelry by its beams giving Pars free reign to display his amazing techniques to the delight of casual Jivers and serious music fans both!

There was no slacking during this legendary night as Cry Wolf unmercifully treated us to a fantastic array of encores akin to a third set with the crowd getting down and sweaty by now on the gridlocked and beer drenched floor of the Henry as strains of "You Give Love A Bad Name" was swiftly replaced by crunching versions of "Tush", "Paranoid" and "Sharp Dressed Man". Far from their nemesis, folk were howling for more and gleefully climbed aboard the "Crazy Train" and "Walk This Way" before finally rockin' out excessively to "Whole Lotta Rosie."

Always a pleasure to play for the 'true' rock aficionados and many thanks for the tremendous support...Keep the faith!! \\m//

Cry Wolf - a superior performance in a very atmospheric Blacksmith Arms, St Albans - a wonderful city centre pub with great character & beer garden to match. It was great to see the band here - it's our nearest venue as they are a south-west London based band. Their sheer professionalism with a long partnership amongst band members proves magical. Tunes performed include songs by Bad Company, Red Hot Chilli Peppers, Def Leppard, Nickelback & Metallica....Pars (Kaptain Krunch) is an absolute master on guitar. I believe the band are looking for gigs in the North London area.....bring it on....

Thanking you most kindly Chris...it was a pleasure to rock with such a receptive crowd...keep the faith!!