Dogleg played at my friend’s hen party last Saturday (15th Sept) and were awesome. It had been planned for a long time and their communication throughout was prompt and reassuring.

They played great sing-along covers, learned two new songs and even wrote a special song for the bride to be which was wonderful. We all had a great evening and our Hen was left with many happy memories (and rather a large hangover the next day!).

I would definitely recommend them and really hope to see them play again in the future.

Thanks so much Tracy and Steve!!!

Thank you so much for your review. dogleg enjoyed playing at the Hen party. Wishing much happiness to the future bride to be and hope to see you all again. 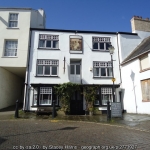 What a stonkin' great night! Dogleg held the whole audience in the palm of their hand, including the dancing Marines!! Bring on the next one!