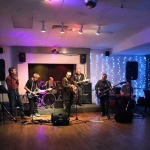 Great to have Dutty Rascals back to play for us again at our Wednesday music evening. Great choice of songs. Sam's vocals were top notch as usual, with great support from Andy on Guitar, Arron On Bass and Paul on Drums and backing vocals. Great band, lovely people!!

Great gig in the garden! The Lord Nelson, Brentford on Saturday 15 July 2017

Dutty Rascals headlined our pub festival, playing in the garden on Saturday night. Great band with great tunes that got everyone dancing and singing along. Sound levels were brilliant and they couldn't have been friendlier. Book them you wont be dissapointed!

Thanks! Was really good fun. Hope to play at the Lord Nelson soon again.

This was the first time I have seen the Dutty Rascals play after hearing so many rave reviews about their performance. And I was not disappointed. I was really excited to see them play, and had a fantastic night! All members of the band were fantastic, and I especially loved the lead vocals! They created a fun atmosphere which invited the audience to sing along and have a bit of a boogie! Can't wait to see them again and will definitely recommend highly to all my friends and family! Go Duttys! %uD83D%uDE0A 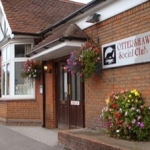 Many thanks to Dutty Rascals for a great evening at Ottershaw Social Club 27th August 2016. What a great mix of music you had for us from "heard it through the grapevine to "Valerie" , "Son of a preacher man" to "All about the base". Great voices, lovely friendly people - hope we will see you back in Ottershaw again.

Thanks Becky for your kind words, hope to hear from you soon.