On-stage until: midnight approx - two sets with a "bar break" in between.

This is a great "classic rock" band who have a good, solid repertoire of material that they play and sing very well. The set varies from gig to gig, but you will often see classics such as:.

A nice, tight, punchy rendition of this classic number. As the band is a trio, the organ solos are played on Ed Hudson's guitar instead - and they sound great!

They often play other Deep Purple songs such as Smoke On The Water (rude not to..), Black Night and/or Hush.

Fantastic punchy precise drumming from Kev Parker and note-perfect guitar work from Ed. Ed has a great "bluesy" voice and this number can become a great "singalong" involving the audience too!

Other Black Sabbath material: you will hear "Paranoid" on some nights...

Ain't No Love In The Heart of the City - Whitesnake.

Go on, have a nice sing along to this one...

Just a great "feelgood" number - they occasionally play "Freebird" too despite just having one lead guitar. Pete Armatage's bass work flows particularly well on this one.

Sunshine of Your Love - Cream.

A chance to hear Pete sing too - nice classic bluesy rendition in a Jack Bruce stylee.

You will sometimes hear White Room too.

A rare chance to hear this great number from an underrated rock band...

There are some great vocal harmonies on this one.

You will sometimes hear All Right Now too.

No-One Knows by Queens of the Stone Age,

Wildflower by The Cult,

Gimme All Your Lovin by ZZ Top,

They also sometimes bring out some great punk covers such as

I Fought The Law - The Clash.

Whiskey In The Jar by Thin Lizzy.

In my humble opinion, the best song Lizzy ever did... But you could well see Jailbreak and/or Don't Believe A Word...

I hope my notes above give you a flavour of the type of songs you can normally expect to hear when seeing this fine act.

A night with the Ed Hudson Band at the Coach and Horses, Isleworth is a treat for any rock fan.

I'm looking forward to seeing this great band again at this nice little venue in June - hope to see you there!

The venue serves Youngs beers (and of course other drinks including soft drinks for the driver etc) and has a pleasant atmosphere. The pub has a nice car park which can fill up quite a bit when there are functions next door too but parking is rarely a problem.

Thanks for your comments-you've obviously seen us a few times and the Coach in Isleworth is a good pub venue for rock bands. There's a new stage there now too! 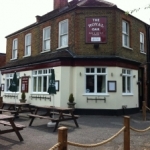 Watched Ed Hudson band play here for the first time and thought they were fantastic - nice clear crisp sound, plenty of well known songs, shame the audience was a small number. More fans need to come and watch these great bands play as it's a lot cheaper than going to big concerts. The Royal Oak has had bands playing live music on Friday nights since the middle of 2008 and are making big efforts to get known on the gig venue scene with plenty of well known bands booked in to play. Now extending to have bands playing on a Saturday night as well, so well worth keeping an eye on their diary to check who is playing there.

Its a great pub venue (good sound - friendly people) and we're hoping to build on our first gig there. Next gig is on friday 27th feb-looking forward to it...Ed.