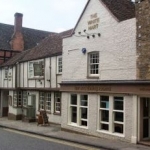 Went over to Hemel having read about you on LRock (we go see a band every wkend) thought you were v good, despite 3 false starts - due to the sound police on the wall - why ? & most of the pub not caring if a band was on or not (we won't be going back) enjoyed 1st half with a few of my faves but then had to escape the drunk yoofs ! sorry. Will def come & see you again - please come & play at our regular sat night, the best live pub for miles & where you will be appreciated & enjoyed by a great crowd who are there to see a proper old punk/rock band ! Please check out The Wheatie in Leighton Buzzard & get in touch with them or me, you'd go down a storm, have a good wkend, hope to see you soon, cheers Paul.

Hi Paul, thanks very much mate. Yeah we didn't know about the sound limiter until we got there..never works! And the youngsters blatantly aren't into live music so as nice as the venue managers are, we won't be coming back here but we may very well contact The Wheatie at your recommendation, that's great cheers!

v authentic/punchy/lively . havent danced for years but saw them at apub last year and was on my feet all night! Cant wait to see them again

Thanks for the kind remarks Andy see you at another gig soon!

The Lee Aaron Band were out checking some other bands as we had the night off before an early start to get to our gig in Derby the following day.

The Heron (run by very friendly bar staff) was our first stop for the evening where our good friends, Sounds of the Suburbs, were playing. We managed to arrive 5 minutes before Fran and the lads kicked off. It was good to note that the band area was a nice size and had high ceilings which meant the Band could display their new Backdrop in all its glory. The set up looked good: well laid out and was completed with a rope-light boundary, which gave it a kind of 'force field' appearance.

With Brian Ayres on sound, the band kicked off with Rebel Yell. The sound was good and the band room started to fill up, as the band powered through the set covering The Stereophonics, Foo Fighters, Undertones & Oasis plus many more great songs that I don't remember now, as I had a long weekend of gigging myself.

The room started to get fuller with some dancing going on: all in all a great first set. (If you haven't seen the SOTS before and you like it 'rocky' with a 'punk' feel, get yourself down and see Fran and the lads. They are a great band and I can promise you will have a fun-filled night.

Thank you so much Dick, it was fantastic to see you, Lee and Barry on the night, we love it when bands support each other. This was our first time at The Heron so we didn't really know what to expect but it was a fun night. We will definitely come and see you guys soon, your positive review means a lot, cheers!

Sounds of the Suburbs play at home [The Swan, Farnborough] on Saturday 12 February 2011

When the Band plays at home you know you are in for a treat. An excellent night's performance with The Swan packed with loyal fans, newcomers and regulars.

Wall to wall entertainment! What an inspired mix:- Undertones (My Perfect Cousin), Oasis (Rock 'n' Roll Star), The Ruts (Babylon's Burning), Aha (Take On Me), Primal Scream (Rocks Off) and so many more.

I still think the Band's interpretation of the Eurythmics' Sweet Dreams is so origina and it was great to hear Billy Idol's White Wedding on the set list. About time too!

Well done again guys. No faffing around chatting up the audience. You don't need to. Your music says it all!

The best band in the south east Mr Bumble, Camberley on Saturday 8 January 2011

Yes, the headline which was made by the landlady of Mr Bumble after their 3rd encore doesn't lie. I've seen this band a few times now and they get better every time. I took 6 friends with me who hadn't seen them so I could get a different view on what the band was like. My friends were a mixture from early 20s to early 50s and they loved them right from their versions of the Stereophonics' "Dakota" and the Foo Fighters' "Times Like These" to AC/DC's "Back in Black" and "A Whole Lot of Rosie" through to my faves The Ruts' "Babylon's Burning", The Cult's "She Sells Sanctuary" and The Dead Kennedys. The venue was absolutely buzzing right from the first song and you gotta catch their punk version of the Eurythmics' "Sweet Dreams" - pure quality, yes the landlady was spot on.

Please check their gig list for 2011 because I'm sure pretty soon you will soon be paying at the door to see them.

Thanks a million for your fantastic review we had a awesome night and Philippa the landlady is a lovely lady. Thanks so much for spreading the word John. SOTS xx