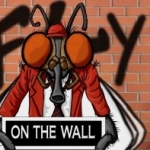 Well me and my crowd reckon it certainly was for FOTW!

Fat Lil's is an excellent music club, which showcases top quality bands and is high on any serious band's "gigs to do list". Club owner, Paul, and his team always ensure a great welcome and atmosphere, and the top quality professional sound system brings out the best of the band on stage.

The capacity crowd made this first FOTW show at Fat Lil's a truly memorable and enjoyable evening's gig. These guys are often surprising their ever growing legion of loyal fans with new classic covers in their sets, which always ensures very vocal audience participation.

Classics such as Bob Seger's "Old Time Rock 'n' Roll", and The Stones' "Honky Tonk Women" got the crowd warmed up and the tempo increased from there. AC/DC was well represented with "Rock 'n' Roll Damnation" (how does Mr C sing that high!) and a rockin' good "Highway to Hell," supported by really musical vocal backing from the massed choir of the FOTW fans.

The fans were in evidence again for "Born to be Wild", and FOTW's version of this rock classic is fast becoming their trademark track. Cold Play's "Yellow" and Bill Wither's "Ain't no Sunshine" (what a soulful solo there from Ali on his keyboard!) gave a short respite from the hectic tempo of the gig.

The band's muso's were clearly having a great time and fully displayed their skill and technique once again and it's sometimes difficult to realise that FOTW is only a four piece band! Densil's awesome guitar solos always stand out and lead singer Mr C is a real rocker with an incredible vocal range. Drummeister Jay got a well deserved ovation from the crowd for his solo at the end of a stonking version of Led Zep's classic "Rock 'n' Roll" and Ali's keyboards and solos give the band its depth and body and enables FOTW to deliver its sets of covers from such a wide range of song genres.

With their final encore of Ozzy's "Paranoid", FOTW left the happy crowd well pleased they had visited Fat Lil's that evening. FOTW say they will be putting some of the tracks recorded at the gig on their site which will be a great souvenir of an excellent evening.

Saturday 17 September 2011
Reply from Fly On The Wall:

Thank you Music Fan!! We really appreciate your feedback. We had a seriously good time at Fat Lil's and hope to be asked back soon! Meanwhile, see you at The New Inn Witney on October 22? Make yourself known and I'll get you a beer or two!cheers from us all at FOTW, Ali

Write a gig review for Fat Lil's »
Share this page