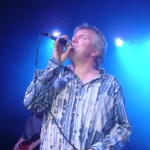 One of the UK's most powerful vocalists, Paul Cox, and his fine band bring the very best of Free, Bad Company, and even Led Zeppelin in a 70's classic rock set

Fire and Water offer a high-energy mix of the three bands' songs in their set, classics like, ‘’Can’t Get enough’, ‘Feel Like Makin’ love’, ‘Stairway to Heaven’, ‘Whole Lotta Love’ and ‘All Right Now’, etc. are faithfully reproduced.

They interpret these classics songs of the genre with sympathy and feel, in their own accomplished style, always keeping true to the spirit of these British Rock anthems.

The band have been together for over six years and in that time honed their act into what you hear today, this has helped them to build up a considerable following on the club circuit. Where fans relive the classic hits while appreciating a truly great band in their own right.

Fire and Water have received praise from both their peers and critics alike for their polished performances at which the audiences generally participate, singing along to the classic numbers. Their live shows are an uplifting experience that should not be missed.

Unlike some tribute bands, who spend more time on their wigs and make-up than on getting the feel and spirit of the music right, for Fire and Water the music always comes first.

All members of Fire & Water, have grown up listening to the music and are all fans of the bands. They are all professional musicians who have played in bands with such luminaries as Paul Rogers, Ray Davies, Bonnie Tyler, Georgie Fame, Jethro Tull, Kokomo, FBI, Pino Paladino, etc.

Previous gigs (3) »
Export gigs as an iCalendar (.ics) file for Apple, Google or Yahoo Calendars.Note: some iCalendar implementations incorrectly cache your calendar. To prevent old calendars showing on other sites or apps, replace the URL in your diary site or app with the URL shown - this URL changes when your calendar content changes, so your feed will always be up to date if you always manually replace the URL.
Export gigs as a CSV file for OpenOffice Calc, Microsoft Excel or other spreadsheet.
We use cookies to make life easier.
Info »
We use cookies to make life easier.
Info »