A fantastic gig, thanks for a great night.

So much different material. We had Jump, Van Halen, Billy Idol, Foo Fighters. Crowd loved it.

A shame the pub did not allow an encore!

Waited 10 mins before they said you had to stop.

Thanks for a great night, one of the best live pub bands i’v seen. Super cool band. Andy Roberts 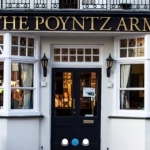 Well what a performance! I was told you were good but no one prepared me for this! What an atmosphere! The whole place was rocking! Your Sex was certainly on fire and I am a big Bryan Adams fan, so it was inevitable you were going to be a hit with me! Can't wait for your next gig guys!

Thanks for your applause and we will be back at The Poynts sometime early next year...see you then! JJ

Great gig at the Blue Anchor on Sat, had everyone smiling and up dancing! Good range of songs, and as always, performed brilliantly. Keep it up guys!!

This band without doubt put the Fun back into a Saturday night out. Brilliant fast moving gig at Knaphill wmc recently. The auience enjoyed it the band were enjoying performing