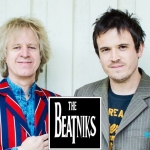 Absolutely excellent The Beatniks on Sunday 1 May 2022

"Absolutely excellent" was the phrase I muttered to the lead guitarist as he walked past me at the break - to him, yet another platitude from an anonymous punter, he had no way of knowing that what I said was based on conviction and truth. I truly was very impressed and pleasantly surprised. This duo stands head and shoulders above anything normally heard in the pubs. Two outstanding musicians, experienced and knowledgeable in their craft - the telling thing is not just their extreme competence with their instruments, but their wisdom and awareness of HOW to use that palette; always sparingly and never excessive, complementing each other at all times, when the lead guitarist stepped away from his formidable backing playing to playing lines, the bass player immediately stepped up a gear to hold the centre ground - impressive stuff. Very impressive vocals too, recording quality indeed.

The Beatles were the most important - and indisputably best - band of the whole pop/rock era, but I don't tend to like hearing their songs played these days, too rooted in the past for me, and mostly bands who play Beatle covers don't do them justice. But I thoroughly enjoyed the Beatniks renditions of these classics, they were note-for-note accurate, and in sound and harmony too. As with anything, there are things I would have preferred, such as during their excellent rendition of "Friday on my Mind", I would rather the guitarist had paused to play the stirring classical flourishes in the song instead of scat-singing them (as typically competently as he did), and in "Gimme some Lovin' ", this was perhaps a song too far in terms of the cohesion and particular sound of the band, nothing really replacing the distinctive organ riff, though the guitarist understandably and commendably responded to the sonic gap by playing two chords down from the root (in the key of G, it was F) instead of the 7th as in the record, to give it more definition and power than the actual phrase would have done on guitar when he had two jobs to do at once anyhow. But then again, that's rather carping, as they still produced a stirring version that the crowd fully appreciated, and in everything they did, their quality shone through. As yet another passing punter said - "Absolutely excellent". 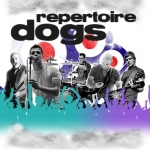 Brilliant gig in the George 111 last night, the weather kept quite a few people at home I think, quieter than usual, but those that were there really enjoyed it. Thanks for a great night 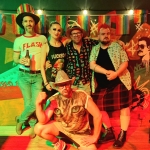 Seen these guys a few times in and around Hertford and im always impressed by their bonkers set list. Its always refreshing to hear a cover band try something diffrent and this lot nail it everytime. In fact, when they started rapping and gyrating to Pony the female members of the audience joined in and turned the place into a strip club. Thoroughly recommend you check these guys out.

Wow thanks Phil, if I remember correctly they were a few men gyrating with equal gusto - thanks for the kind words! 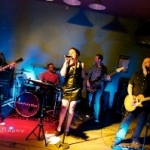 I see 2 or 3 live bands every week, one of the tightest bands musically you will ever see on a pub circuit & vocally, Beki the lead singer is off the scale, absolutely fantastic, if you love live music & haven’t seen this band have a look on lemon rock se where they are playing, you won’t be disappointed

Hope to see you at a venue soon. 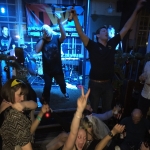 I have followed Mice With Glasses for many years now and I can honestly say they are my most favourite local band. Nobody else quite tops how they get the crowd going every single time. A great mix of songs to get everyone going and not the usual cheese. These guys are genuinely nice people and their gigs are pure fun and upbeat. We have even booked them for our wedding! :-D