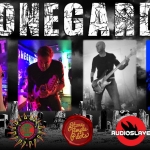 ''STONEGARDEN have been formed for a couple of years. Our focus right now is the US Grunge-rock scene of the early 90s, plus a few spin-off bands comprising members of those original Grunge bands.

So, more about us as a band. If you’ve watched local bands over the past twenty years in the London and Home Counties area, you'll have seen Tigon, Goodfellas, Action Men On Speed and The Daves, etc., We were all in one or more of those bands at some point. We’ve all also played in various original acts over the years (Lyadrive, Fused, Skinny Millionaires, Forbidden, Spooky Root Bloodgroove, February Of Strangers & Arcane to name but a few) who played venues like London Astoria 2, The Underworld, Dingwalls, Bull & Gate, The Garage, Dublin Castle and others. We’ve been around, seen a lot and done a lot.

But Grunge is where we’re at. There were some great bands in what was an iconic era for rock, spawning some Grunge-rock greats such as Nirvana, Alice In Chains, Soundgarden and Stone Temple Pilots, plus some great spin-offs like Temple of the Dog, Velvet Revolver and Audioslave. Bands who could really play and who wrote great songs with great melodies that will stand the test of time. Fans of those bands had a real connection to their heroes and we all grew up loving that music scene. Some of those rock icons have departed this mortal coil but their music lives on. STONEGARDEN aim to keep that music alive, to play it live and to offer audiences the chance to hear some of those classic Grunge tracks played live and played well.

That’s us. That’s what we do. And even if we say it ourselves, we do it well. Because we love doing it.''

5 tracks, 3 gigs
Stonegarden : STONEGARDEN are THE Grunge Rock Genre Tribute Band, bringing you the authentic sounds emanating from the USA back in the early 90's. As we get back on our feet moving through 2021, we hope to add more songs & expand our artist roster. As it stands you can expect to hear classic hits & deep cuts from STONE TEMPLE PILOTS, ALICE IN CHAINS, NIRVANA, SOUNDGARDEN, PEARL JAM, AUDIOSLAVE & VELVET... (more »)
The Horns, Watford : Having seen giant acts like The Staves and The Spitfires get their footing here, it is no wonder Watford’s ‘The Horns’ has been voted VOTED BEST LIVE MUSIC VENUE IN THE SOUTH EAST BY THE INDUSTRY!!! Promising over six live acts a week, ‘The Horns’ is Watford’s only “real” live music venue and has thus been voted THE BEST BAR NONE pub/venue in Watford 2008 and 2009! Through thick... (more »)
We use cookies to make your browsing experience better.
Info »
We use cookies to make your browsing experience better.
Info »