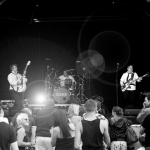 Colvex are delighted to announce their first live show of 2020 when they return to play at their spiritual home-from-home, The Horns in Watford on Monday 11 May.

With support to be announced in due course the concert will be one of the newly revamped Monday Nights Overdrive shows at the venue and is sure to be one to remember.

The Horns is located in Central Watford and is easily reached by train from Watford Junction (20 minutes from London Euston) and Watford Underground station on the Metropolitan line. Local parking is also available. Best of all, admission is absolutely FREE so save the date for what promises to be a great show!

(Not re-booking)(cancelled 7 May 2020)
Colvex : Colvex are a three piece band from Hertfordshire that plays powerful original material across a wide range of styles. Having earned a nomination for Best Live Act at the 2010 Emerging Music Awards, the band released their self-titled début album on D-Classified Records via iTunes, Amazon and Spotify in 2012. Since then Colvex have gained critical acclaim performing at numerous major outdoor... (more »)
The Horns, Watford : Having seen giant acts like The Staves and The Spitfires get their footing here, it is no wonder Watford’s ‘The Horns’ has been voted VOTED BEST LIVE MUSIC VENUE IN THE SOUTH EAST BY THE INDUSTRY!!! Promising over six live acts a week, ‘The Horns’ is Watford’s only “real” live music venue and has thus been voted THE BEST BAR NONE pub/venue in Watford 2008 and 2009! Through thick... (more »)
We use cookies to make your browsing experience better.
Info »
We use cookies to make your browsing experience better.
Info »