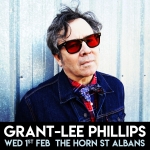 Many singer/songwriters are considered either strong vocalists who can also write or gifted composers who can sing a bit. Grant-Lee Phillips, on the other hand, is an exception, a tunesmith with an impressive command of both lyrics and melody who also possesses an instrument that's full of expressive character. Phillips' voice has a smoky texture paired with a honeyed smoothness, and his music is concise and graceful, matching the thoughtful romanticism of his verses. Phillips initially earned a significant reputation as the leader of the group Grant Lee Buffalo, who broke through with their debut album, 1993's Fuzzy. After going solo, he delivered a consistently strong body of work, with 2001's Mobilize, 2009's Little Moon, and 2016's The Narrows as standouts.

add to calendar » 8pm - 11pmEntry: advance £18, on-the-door £201 gig
The Horn, St Albans : Hertfordshire's Premier Live Music Venue continues a proud live music heritage from the days when Paul Young started out, Kim Wilde worked behind the bar and John Peel used to be a frequent customer. The Horn puts on Live Music 6 nights every week except on Mondays when it's Quiz Night. Please see our website for full listings. www.thehorn.co.uk The Horn is situated right next to St Albans... (more »)Live music is sometimes charged for.
We use cookies to make your browsing experience better.
We use cookies to make your browsing experience better.