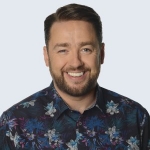 He’s back! It’s been a busy few years for Jason since his last smash-hit stand up show but fans of his Absolute Radio show will know this nationally acclaimed comedian hasn’t changed a bit. ‘Like Me’ is Jason’s latest comic offering set to hit the road, and is sure to be ‘expert observational comedy’ (The Guardian) mixed with ‘comic gold’ (Mail on Sunday).

Jason said: “After the fun we had on my last tour ‘Muddle Class’, I’m excited to get back on the road with my new stand up show, ‘Like Me’. In these trying times it’s always important to be able to get away for a couple of hours and exercise the old chuckle muscle! So I’m coming to a venue near you in 2021/2022 so we can have a good laugh together. See you then.”

2 gigs
Exmouth Pavilion, Exmouth : Exmouth Pavilion boasts beautifully maintained landscaped gardens on Exmouth's stunning seafront. With glorious views of golden sand, which stretch all the way to Torbay. There is complete level access throughout the building and grounds. Private parking is adjacent to the venue. The Pavilion is the largest venue in East Devon, capable of holding up to 1,000 people with seating up to 500 in the... (more »)
1813
views
We use cookies to make life easier.
Info »
We use cookies to make life easier.
Info »