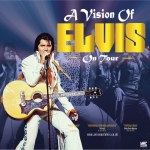 – his charisma, his gestures – hell he even walks like Elvis!"

Performing to thousands of fans in major theatres, festivals and arenas worldwide and making history by being the first Elvis tribute artist to perform at the New Wembley Stadium to over 50,000 people, Rob brings you a brand new high octane show. All costumes, instruments and stage set authentically recreated to give the feel and energy of a live Elvis concert, which promises to be the ultimate experience for any Elvis fan the world over.

Rob’s contact with the audience is immediate – As soon as the concerts begin, surrounded by his outstanding musicians, backing vocalists and production team they take the audience on an emotional roller coaster through time and in doing so, engages audiences with a true Elvis Concert experience featuring Elvis’s greatest hits including… Heartbreak Hotel, Blue Suede Shoes, Love Me Tender, Jailhouse Rock, It’s Now or Never, Are you Lonesome Tonight,In The Ghetto,Suspicious Minds, American Trilogy and many more will show audiences why A Vision of Elvis is regarded as the best in the business.

A Vision of Elvis – IS the ONLY Elvis show to see.

“The King is Back”

"Elvis was in the building"

2 gigs
Exmouth Pavilion, Exmouth : Exmouth Pavilion boasts beautifully maintained landscaped gardens on Exmouth's stunning seafront. With glorious views of golden sand, which stretch all the way to Torbay. There is complete level access throughout the building and grounds. Private parking is adjacent to the venue. The Pavilion is the largest venue in East Devon, capable of holding up to 1,000 people with seating up to 500 in the... (more »)
1846
views
We use cookies to make life easier.
Info »
We use cookies to make life easier.
Info »