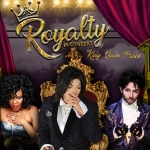 For the first time in the UK you can now celebrate the music from three of the most iconic artists of all time.

Michael Jackson, Whitney Houston and Prince. Over two hours of chart stomping hits that will keep you entertained from the beginning to end.

Led by Navi - The World's No. 1 Michael Jackson impersonator, Navi has achieved multiple accolades during his career which include working for Michael Jackson himself, being invited to Neverland, performing at both MJ's birthday parties in New York and Los Angeles as well as being chosen to portray the role of Michael Jackson in the Hollywood movie 'Searching For Neverland'

The production also includes one of the finest Whitney Houston impersonators in the world. Nya performs hits such as… How Will I Know, The Greatest Love of All, I Wanna Dance with Somebody, So Emotional, One Moment in Time, I’m Your Baby Tonight, I Will Always Love You.

Completing the line up is Toni as Prince, who is recognised as one of the top tributes to Prince in the UK. Featuring hits such as… When Doves Cry, Purple Rain, 1999, Little Red Corvette, The Most Beautiful Girl in the World, Diamonds and Pearls.

1 gig
Exmouth Pavilion, Exmouth : Exmouth Pavilion boasts beautifully maintained landscaped gardens on Exmouth's stunning seafront. With glorious views of golden sand, which stretch all the way to Torbay. There is complete level access throughout the building and grounds. Private parking is adjacent to the venue. The Pavilion is the largest venue in East Devon, capable of holding up to 1,000 people with seating up to 500 in the... (more »)
1340
views
We use cookies to make life easier.
Info »
We use cookies to make life easier.
Info »