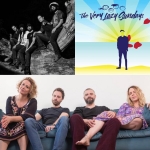 In The Forest (Acoustic / Folk) at The Horns, Watford Buy tickets »

In the forest are a four-piece indie-folk band from Bedfordshire (made up of two sisters and two couples).

Having spent years making music in various bands, in 2017 the foursome escaped to Devon for a family holiday. Sat in their seaside cottage one evening, they wrote their first song together and became In the forest.

With four experienced singer-songwriters each bringing different influences (from folk, roots, indie, reggae to pop), the band has since worked hard on the live scene and in the studio.

In May 2020, the band caught the attention of indie record label Last Night From Glasgow – who quickly signed the band to their stable of artists.

1 EP and 2 single releases later, the band are currently working on the debut album with producer Rob Eveling - released January 2023 on Vinyl, CD and digital download.

+ Support to be announced