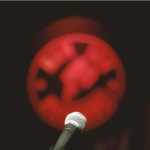 Join us at Crack Comedy for our signature Stand-Up Comedy Course - a practical approach to stand-up comedy.

There isn’t one type of comedy out there, but there is only one way to do stand-up comedy - and that is to stand up and do it!

In this six-week program, we cover the basics of the craft of stand-up comedy. The course is taught by British-based American comic Erich McElroy and at Crack Comedy in Kingston; Kingston’s longest running comedy club.

Taught at Ram Jam Records, an intimate, 60 seater venue which is the perfect intimate space for what might be your first ever gig.

The course is appropriate for those brand new to comedy and who want to give it a try, as well as for newer performers who want to gain more confidence, sharpen their performance and learn more about the business of stand-up comedy.

How it is structured

The program is five weeks of classes with a final sixth week of a live performance. Each session you will get a chance to get on stage - initially with fellow classmates and then with a showcase.

By the end of the course you will have honed in on your material, style, execution, and delivery so that you have the confidence to nail a performance with ease. You will have identified your areas of natural talent, and you will leave with your imagination and creativity in high gear ready to take on any audience.

Each course is limited to only twelve participants.