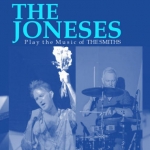 “If I was a confused, tortured teenager hearing Panic for the first time, I would burn down a disco, I'd probably assassinate the queen, and I would definitely form a group – called The Joneses."

The Joneses began life in 2016 with Aidan Sheridan ‘Morrissey’ deciding to form the band because of his life-long love for Smiths music and an uncanny resemblance to Morrissey himself. Aidan met Matthieu in Camden Town, and while none of the two partners had any prior band experience, both shared similar passion to do justice to the band they loved most.

Soon joined by fellow musicians Neil Batey on bass and Steve Nye on drums, the band considerably improved their profile in the last 19 months to play 20 gigs across 13 venues in London, Margate & Birmingham – to rapturous applause & reaction from fellow Smiths fans.

The Joneses have developed a very unique style based on The Smiths live gigs, as opposed to the studio recordings. This introduces a stripped down, dramatic show with nods towards punk and rockabilly genres. This delivers a very lively and engaging show, with performances by Aidan ‘Morrissey’ recreating some of the antics performed by the original front man, which include wearing tattoos, brandishing and throwing flowers, undressing, rolling around the stage (where space permits) and thrashing about in Morrissey’s distinctive style.

‘The Joneses tribute to The Smiths has the best Morrissey front man I have seen in The Smiths tribute scene, a must see if you can get to their gigs. They offer something unique in the highly polished Smiths tribute market – a band that connects with the audience.’

1 gig
The Joneses : “If I was a confused, tortured teenager hearing Panic for the first time, I would burn down a disco, I'd probably assassinate the queen, and I would definitely form a group – called The Joneses.' Morrissey, in Rolling Stone, October 9th, 1986 Four individuals driven by the passion for The Smiths capture the extraordinary diversity of melody and mood in a show that has to be seen to be... (more »)
Ruislip Social Club, Ruislip : Tropic At Ruislip is the club name for Friday and occasional Sundays nights at Ruislip Social Club, Grosvenor Vale, Ruislip, Middlesex HA4 6JQ. As promoters of live music at this venue we aim to bring you at each and every gig night a top, professional, live band, backed by a full PA system. Bands will be drawn from a broad range of acts including top tribute bands as well as established... (more »)Live music is always charged for.
1145
views