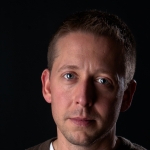 JP began singing in 1995, starting out in the bands Red Rooster, Brassneck & Cavalier, followed by appearances in various musicals and plays, including Jesus Christ Superstar, Little Shop of Horrors and Guys & Dolls. He is incredibly versatile and has a broad vocal range (baritone to top tenor), as well as a strong falsetto voice, so can perform the likes of the Beach Boys, ELO and the Temptations. From his days in a blues band, he is also able to play harmonica or 'blues harp' as it's also known, and does so on several numbers, giving him an interesting and unique edge.