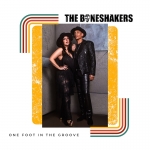 In 2022, as The Boneshakers celebrate the 25th anniversary of their first release, a new energy and excitement has emerged.

Producer John Wooler, who originally signed The Boneshakers in 1997, connected Randy and the incredible Jenny Langer - a powerhouse singer who was inducted into the Blues Hall of Fame (NYC and VA) at the age of 28 and won the 2020 Int’l Blues Challenge for Best Self-Produced Album. What started as a few tracks for her project quickly morphed into a new album with The Boneshakers featuring no-holds-barred funk, blues, and rock that marries the sounds and spirits of Detroit Rock City, Memphis, and Mussel Shoals.

The Tuesday Night Music Club, Coulsdon : The Tuesday Night Music Club brings you the best in live music every Tuesday night. Situated in central Coulsdon at The Comrades Club it is within an easy walk of both Coulsdon South and Coulsdon Town British Rail stations. Served by numerous bus routes and being easily accessible by road with plentiful parking both on street and in a public car park just round the corner in Lions Green Road... (more »)Live music is always charged for.
2591
views
We use only essential cookies.
Info »
We use only essential cookies.
Info »