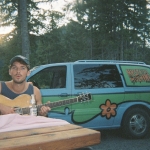 Recently returned from supporting Tom Odell on tour & currently working on his debut EP, singer songwriter Cartwright has been featured on BBC Radio London & this will be his first time performing at The Brewery Tap.

Cartwright found himself deep in the highlands of Scotland with just a campervan and guitar during the summer of 2021. Having discovered a fishing lodge on his travels that his late father used to visit, he learnt that it had once been owned by his long lost uncle Jack Cartwright; uncovering a new branch of his family and a new musical direction.

Taking inspiration from the likes of Ben Howard, Bon Iver, Big Thief and Alex Turner, Cartwright was born. The songs are a musical embodiment of his search for identity and the wilderness he finds it in.