The Half Moon, Putney [Music Venue] 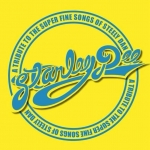 Steely Dan tributes are not something you see every day. The music is so ambitiously challenging and complex, that to recreate the sound effectively takes many hands. But this is something Hertfordshire based tribute, Stanley Dee, appear to take in their stride.

If you are familiar with the Hertfordshire circuit you are sure to have come across them at the Horns in Watford or the Farmers Boy in St. Albans, where they are local favourites. Lead singer Cavan Daley also fronts another Watford stalwart, the Zimmerman. Wherever 'Stanley' go they are well received and certainly know how to have a good time.

But how would Stanley's fledgling gig out of Hertfordshire at the Half Moon Putney fair up against the notoriously intimidating and ruthless London audience ?

The crowd came in thick and fast to hear them and, although they were not packed in like sardines, they were more than appreciative and joined in the fun eventually. I am not certain what this London audience expected from these 'out-of-towners' and by their initial reception I'm not sure they knew what to expect either. It took them a few numbers to get into Cavan's animated performance and realise that what they were hearing were near note for note musical renditions of Steely's songs. About half way through the first set when the band performed an amazing version of "Rikki Don't Lose That Number" the audience realised they were in the presence of a very faithful, dynamic band with killer female vocal harmonies and an astounding brass section.

The varied set list comprised of favourites like "Haitian Divorce" and "Do It Again" along with some more unusual choices like "FM" and "With A Gun". The band manage to interact well with each other given the limited space and this playful interaction helps the audience to loosen up too. By the end of the set they were Stanley converts and helped end the night in a high with a version of "Reelin' In the Years" which in zeal and energy matched the original.

Given that they entered London as unknowns tonight, they left with another gig booked at the Half Moon, a captive audience and the beginning of a new London following.

Thanks very much Gerry for taking the time to write a review.

We did enjoy out first Putney gig and will be back at The Half Moon on Sunday 23rd March.

Write a gig review for The Half Moon »