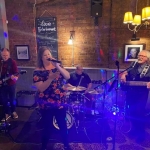 Big thank you to Helen and her band for an amazing night for my 60th birthday. We booked Undercover after having a great night where they played at a birthday party a couple of years ago. Helen was easy to communicate with, fun and friendly and sent me an extensive cover list to pick my preferences from.

The band arrived early with time to set up and created a great atmosphere, the whole party were singing and dancing all night. You made my 60th birthday really special. Thanks again, Michele & family.

Yet another great gig from this great band, such a wide range if covers, great self promotion, they sell themselves! Laura the pub manager had a great evening and the band dedicated the show to her for giving them the chance to play in Hertford, hot and sweaty, everyone involved, great singing and dancing by everyone, three encore numbers, my suggestion? Go see them !

Thanks for your kind words, glad you liked it, it was a belter!

Thanks Laura, one of our top fans!

The Duncombe Hertford Lost Cause on Saturday 4 May 2019

This band just keeps getting better, you must see them! Thanks for a great evening and for getting involved with the crowd, never seen a lead guitarist go to the bar to order a drink whilst still playing ???

Cheers for the review, shame was, I don’t think he got served????

Went to Wickes Hertford Xmas last night at the Duncombe Arms, live music by Lost Cause, as it was an Xmas dinner, the band offered to start late so that we could talk.

Wow, they made up for it when they started playing for us! 2 solid hours of fantastic covers, great playing, great singingcand a very tight band, they encouraged us to get involved and we did, the crowd really enjoyed it, the regulars loved them.

We will be back to listen to them next time they are in town, it was their first Hertford gig, it wont be their last !

Sunday 2 December 2018
Reply from Lost Cause:

Thanks for that. Next time our guitar player gets plastered, we’ll be sure to pop in for a trowel!

This is the first time I have seen Undercover before and I can't wait to see you again next year !

Thanks for such for an amazing night, was epic.