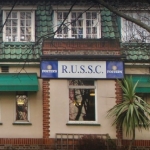 Brilliant night singing and dancing. Lots of energy from the guys. Great set thank you for a great night.

Thanks for the review. We had a brilliant night at your club. Great venue and great members/guests. Looking forward to playing there again later in the year.

Asked the band along to play at Meads Primary summer fete on Saturday 2 July and I have had endless calls from people that attended telling me how much they enjoyed the music and how good the band were - top notch performance and I would recommend the guys to anyone.

Many thanks for the review Alan. High Frequency had a great afternoon playing at your school fete, and at least the rain held off!

I've known the guys for a while but that didn't influence my decision when I asked them to play at my friends car show this year. I asked them because I know how good they are and I knew they'd get the party started for all the families and friends that attended the show, they definitely did that!! I've never seen that marquee so full, to the point where people were crowding outside to hear them, sing along with them and have a good ole boogie. Great guys, great music, great band!

Many thanks for the review Ashleigh. High Frequency had a brilliant time at the Vee Dubbers event and look forward to playing again next year, or maybe sooner!!

Had a great night dancing the night away to High Frequency last Saturday. The dance-floor was never empty and I couldn't believe that the older generation could be so wild. Everybody had a great time and I look forward to seeing them again.

Monday 2 May 2016
Reply from High Frequency:

Thanks for your kind comments Amanda. Hope to see you again soon.

Hired High Frequency for my sister in law's 40th party and we were not disappointed! The band sounded great, looked professional, and got everyone up dancing. Their set list was great, and they didn't seem to mind too much when the birthday girl pinched the microphone for an impromptu singalong. Would highly recommend High Frequency!