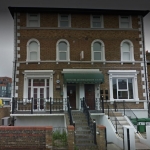 Nice to hear some earlier rock for a change, including even some Ventures numbers; plus very good value bars.

Glad you liked our setlist - although we sometimes stray into the 70s, most of our numbers are drawn from the golden age of rock'n'roll - late 50s, early 60s. We're keeping the flame burning for the superstars of their day - Chuck, Gene, Eddie, Jerry Lee... Come and see us again at the South Wimbledon Club on August 20th! 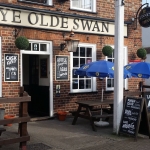 Wow, what a great night!

I walked into a heaving Ye Olde Swan with a wonderful lively atmosphere just as Hog Wild got underway. It was clear pretty much immediately that I was in for a treat as the opening few songs were performed brilliantly with the clarity of sound of each instrument & vocal that you rarely hear at this type of gig.

These guys are all about rock 'n' roll & the lead singer has the most perfect voice for this genre, an American Country twang, bringing each song alive with the most wonderful charisma. I loved "Jitterbug Boogie" & "Treat Her Right" in particular. His added yelps, whoops, yeahs, OK's, laughs & more, really added the x factor (can't believe I just said that!) to his performance. The musicianship was fabulous from all. The drummer & bassist gave the guitars the most fabulous foundation with super solid performances very true to the original recordings. Both guitarist were good but the lead guitarist was pretty much flawless & not a pedal in sight! Some of his solo work was complex & incredible - mostly while he was looking at the audience. Not sure how he does that! The lead guitarist also had several lead vocal duties & he didn't disappoint. His vocal & the band performance on "Pretty Woman" was brilliant. All backing vocals were nicely done.

I noticed that there must of been an earlier communication issue with the pub about the number of sets/breaks. An announced twenty minute break turned into less than 5 minutes. Fair play to the band for being so flexible.

The wireless walkabout from both guitarists & bass player while the drummer stood up hitting the skins was great. It was all about engaging the audience & believe me Hog Wild had the pub totally engaged. I expect the landlord or lady couldn't get his/her diary out quick enough to re-book them.

The band performed around 35 classic numbers, including a couple of encores. Every song super solid. I can't report a banana skin or under par song & I can be a tough critic.

I've been to many a gig but this is the first time I've written a review - it's a glowing one because the Hog Wild boys truly deserve it.

Whether you love rock 'n' roll or not you absolutely should go & check this fabulous band out. Get there early, to make sure you can get through the door!

Thanks Pete, we really do try hard to make every gig special - so pleased that it's appreciated. Come and see us often - we have several gigs at the Swan next year. And keep an eye on Lemonrock to see where else we're playing.