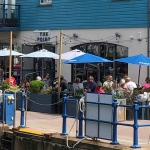 Wonderful performance at our party The Point Bar & Grill, Exmouth on Sunday 8 September 2019

Thank you for your wonderful performance at our party last Saturday night. Our feedback from friends and family has been amazing- they loved the band. It was perfect for our occasion - great songs and music that people could sit and listen to and great dancing music. Also, thankyou for meeting up with us to tailor the event to us.

Thank you for your kind words Julia.

Good Friday: for a change I took the train to Lympstone. With a population of less than 2000 it manages to support 4 very good hostelries. Tonight, I chose The Globe. Always a lively place with a long reputation for good food and a core of regulars that are the sign of a proper pub. The bar and restaurant are buzzing with conversation and, I realise, anticipation, because "Just Misbehavin'" are about to start playing.

Squeezed into one end of the bar, the provisional wing of modern jazz specialists "Take 4" are ready to deliver a set of jazz and swing. They begin with a standard "The Glory of Love". Lyn Thornton delivers the lyrics with slippery jazz timing and illustrates them with a curl of the hands and a beatific smile. Later on, another smile and a twinkle in her eye transforms the innocent words of "King Sized Papa" into something rather raunchier (especially when Ric White's baritone honks nudge those slow on the uptake) Lyn is rather good at digging out these old songs and includes other Julia Lee ditties in her repertoire... and leaves the audience to misinterpret them.

The band take turns to solo and pass the tunes between each other, Ric White played his tenor for most of the evening but brought the big baritone out a second time for "I Just Want To Make Love To You" and the flute on "Do It Again".

Mike Thorn, double bass, a hugely experienced player, often seen depping around Exeter and East Devon, he lays down a swinging bass line that is ever varying, full of interest and he makes full use of the opportunities given during the solo breaks to show off his skills.

The ensemble is completed by pianist Paul Barnham, master of many styles and a stalwart of the Exmouth music scene for many years.

Drummer Ted Draper laid it on the line with some subtlety throughout the evening but abandoned his kit and took up the cowbell and a grin to accompany "Lovecats".

A real Easter gig because the tunes were certainly "Ancient and Modern" although the enthusiastic crowd didn't treat them with reverence. The band takes a pride in varying their sets frequently, Lyn told me that they had 15 new numbers in the pipeline and they always assemble an entertaining mix of standards, blues and more recent pop genres. And, with over 4 octaves at her command, the group comes up with some novel arrangements to test her!

Thank you Bill for this complementary review. We too are please to see The Globe doing well these days. 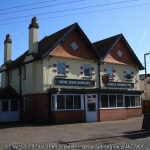 What a brilliant night! The guys and Lyn were absolutely in top form and everyone had a fantastic time. Lynn gave a phenomenal vocal performance and the whole band seemed to enjoy the atmosphere and responses from the audience , rising to new heights of excellence with every set. Some of the dancing had to be seen to be believed! Joints will be aching this morning! The music was exciting, varied and full of rock, swing and that extra added ingredient, which only professional musicians know, that makes an excellent sound into that extra special delivery. What a great night for all and it all went so fast that we wanted more -but maybe that's Misbehavin's trick? - to make you want to come back for more! The supper was extremely popular and everyone remarked that the whole evening was great value for money. So we'll do it again! Thanks to everyone who turned up. Full House! - not bad for our first event! Well done to Just Misbehavin' and we look forward to seeing you again soon.

Jeff (landlord of The Britannia Inn)

Wednesday 8 May 2013
Reply from Just Misbehavin':

Thanks Jeff, for your enthusiastic comments. You're right, it was a great evening. We'd love to come to Britannia Inn again soon.

The first Sunday of the month... 2 o'clock, just time to catch "Just Misbehavin'". Perfection, a warm fire, a nice pint and some great jazz in an intimate situation. Good food, too, if you arrive earlier.

I'm a bit late, full house and the band is in full swing... and I do mean "swing". Ted Draper (drums) and Mike Thorn (bass) really do lay down a great groove. As I seek out a free chair and elbow my way into a spot with a decent view, leader Ric White (saxes, flute) is upping the ante with an inventive solo before handing over to pianist Paul Barnham. Another very talented fellow, with command of a variety of piano styles and, if I'm lucky, some Hammond type organ.

The queen of double-entendre, Lyn Thornton, steps back to the mic and rounds the tune off in great style. What a voice, a belter, a seducer, a teaser... Lyn's great vocal range allows her to change the atmosphere in the twinkle of an of an eye.

And so the afternoon goes. Standards, regular favourites from the more obscure areas of the songbook and always two or three new songs to the repertoire. This time I noted an example of Ric's passion for the Bebop era, a Mulligan favourite whose name escapes me. Timed to perfection. Later I was surprised to discover that "Tainted Love" wasn't New Romantic pop but pure soulful jazz. Lyn doesn't just stand... she delivers. And to round off she steps into the eponymous shoes of Big Mama Thornton and show us and the "Hound Dog" to the door.

The best of local "modern" jazz, well thought out sets, smoothly delivered, interspersed with a little banter from a very popular band.

Bill, Many thanks for this amazing review and thoughtful words. Ted