A massive thank you to Barry, Dicky, Nick and Lee for an exceptional performance at our house party. Everyone thought you were incredible, and its been dubbed the best house party ever - thanks largely to you guys. Brilliant stuff! Antony & Rikke.

Thanks for your kind words, we really had a ball at your house party, you guys really no how to have fun, it was a pleasure to play for you and your friends , thanks for looking after us , you were the perfect hosts. Hope to see you all at a gig soon.

I saw the band for the first time with some friends at Mr Bumble in Camberley and you were FAB.Absolutely great.My friends and i thought that you were the best band we had seen in a loooong time!You brought the house down.You have a great choice of music,rock, pop ,soul.I will definitely be looking out for you again on the live band circuit and have already recommended you.Lee?you have such an amazing talent,you have a great gift and boy can your dad sing. Well done to all you lads in the band you are AMAZING

Thanks for your kind review, It was a great night at Bumbles as it always is, the band had a great time and you guys made it extra special, please keep a check on Lemonrock or www.theleeaaronband.com for future gig dates, when you next come to see us come up and say hello. Cheers Dicky Bass 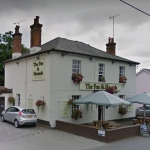 I have been a regular at the Fox & Hounds for a while and love to see the bands on a Friday night. The pub are renowned for having good bands and Friday was no exception when we saw the return of the mighty Lee Aaron Band. (If you have not seen them before make sure you catch them at a gig soon.)

From the opening chords this band were in your face playing a fantastic mix of covers ranging from a couple of sixties favorites including a fantastic cover of Jimi Hendrix's "Fire" followed by numbers from the likes of Queen, Greenday, Paul Weller, The Killers, Kings of Leon, The Fratellis, The Stereophonics as well as a fantastic versions of "Funky Music" and James Brown's "I Feel Good". Their band's setlist and stellar performance had everyone one up on the dancefloor.

The really great thing about this band is that they engage their audience and play a set that 'fits': for example, on this occasion they even popped in some cheesy stuff, including a Ska version of The Mavericks' "Dance the Night Away". All of it went down a storm

This band have a loyal following of fans who make regular efforts to come and see them and while loads of people might have spent Friday night at home saving their energy and cash for New Year's Eve, this gig was well attended because of who were playing, which counts for a great deal to the venue fortunate enough to have capitalised on increased bar takings as a result of having booked them and to the fans who are never disappointed with either the band's performance or the post-gig chats with such a friendly band.

I was therefore really disappointed to hear that the band has decided not to play at the Fox & Hounds anymore and although they wouldn't elaborate as to why, I'm guessing it's for the same reason I've heard other bands use and and down to the Landlord reducing the amount he will pay bands in 2012.

Still, there are other pubs out there and I urge anyone who loves live music to check The Lee Aaron Band out at wherever they are playing, because they are - for my money -one of the best cover bands on the circuit!

From the word go, The Lee Aaron Band hit the road running, rocking hot, fast and furious, captivating the audience with their lively and unique sound.

Their style of presenting classic rock was exciting and exhilarating, holding the attention of everyone in the place.

The band, consisting of three experienced professional sounding musicians and a young aspiring drummer with great potential and a promising future, is a group that rock fans will love.

Numbers played ranged from The Who, Status Quo, Bryan Adams and Queen, to name just a few: all the old favourites played to perfection, with a steady pace that did not falter.

The atmosphere in The Row Barge was buzzing. The appreciative audience participated by dancing, clapping and cheering. The lead singer kept the audience happy by playing requests, and there was a great party atmosphere.

Definitely one of the best bands around, and not to be missed!

Thanks Pauline and John for your Kind Words, we had a great time at the Row-barge as we always do, I must have been elsewhere when we played Staus Quo as i don't remember it being on the Set List :@).

Hope to see you at another gig soon, always check Lemonrock for current gig list or check our website

I have been intending to write this review for some time after seeing this band for the first time, at The Royal Oak in Bracknell on 2nd April. One small word could sum up their performance - WOW. Guys you were superb, it was such a shame that the pub was fairly quiet that evening. However, you livened the place up and made our trip there worthwhile.

Saturday 7 May 2011
Reply from The Lee Aaron Band:

Thanks Jacky, Its always nice to hear that people enjoy what we do, come and say hello at our next gig and we will buy you a drink. ;@)