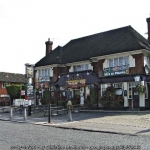 Well done guys for another great night of blues, rock and pop. I will save a full review when I see the five regular Looters in action but congratulations to Dave and Ollie for filling in so well for Steve Oakman and Jim Russell. I particularly liked the funky version of Bill Withers' Use Me' the Johnny Cash medley; and the reggae version of John Denver's Leaving On A Jet Plane. I look forward to seeing the band in all their full glory soon. 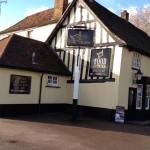 It's truly great to see a professional act who can cope with all adversities. The Looters are such a top band as evidenced when skinsman Jim Russell's bass pedal drum broke and two of the band carried on performing rock 'n roll songs while the others tried to fix the offending machinery!

The Looters started with two of their mainstays, the Rolling Stones/Buddy Holly classic "Not Fade Away" and Otis Redding's "Hard To Handle" before the bass drum pedal decided to give up on life.

The pedal was fixed and the band were a five-piece again pumping out 'classics' like John Fogerty's "Proud Mary", the Who's "I Can't Explain" and the Stones' perennial favourite, "It's All Over Now" (with terrific Jagger-like, growling vocals from singer/harpist Jeff Savage.

Long-serving Looters Jeff and Steve share lead vocals and it seems to work really well. Keyboard man Dave Lennox joined the band for this particular gig and he is a highly experienced musician who has toured recently with Alan Warner's Foundations.

The Looters performed beautifully the Kinks' "Waterloo Sunset" and the Yardbirds' "Heart Full Of Soul" and although I haven't seen the band for a couple of years now, they seem to improve with age and I can't wait to hear them again.

Punters at the Bull loved them too and pub manager Julie James specially chose them to play that day, which was her birthday.

Stealing the Show on Saturday 2 March 2013

The highly talented and versatile Looters served quite a few aces when they appeared at Barnet Lawn Tennis Club with Club Members and guests packing into the Gloucester Road clubhouse to see this outstanding quartet, who specialise in the music of the sixties and seventies.

Plenty of smashes were in evidence as the band brought memories flooding back with a superb mix of golden oldies and it was great to see vocalist and lead guitarist, Stephen J Pomeroy, back after his recent illness. This was his first gig back with the band who have become one of the most in-demand acts on the pub and club circuit.

The quartet started with the customary "Not Fade Away", first recorded by Buddy Holly and made famous by the Rolling Stones. Jeff demonstrated his finest Mick Jagger vocal impersonation throughout the evening on a number of their hits including "It's All Over Now", "Brown Sugar" and "Honky Tonk Woman".

The Looters were in terrific form and dancers packed onto the dancefloor. Favourites like Bob Marley's "I Shot The Sheriff", James Brown's "I Feel Good (I Got You)" and Johnny Kidd's classic "Shakin' All Over" proved particularly popular.

Once again the band's experience shone through and in the second half they featured Beatles' hits like "Come Together", "Get Back" and "I Saw Her Standing There"; the Tamla Motown great "Get Ready" and a fabulous version of the Box Tops/Joe Cocker classic "The Letter", with great harp work from Jeff.

The band knew that many Barnet Tennis members were fans of Elvis and they were happy to provide numbers by the King and offerings of "Blue Suede Shoes", "Mystery Train" and "Little Sister" kept the dancers busy, after which there followed yet another fantastic two sets from a band who deserve a much wider audience. Other sports clubs would be wise to sign them up.

Wednesday 6 March 2013
Reply from The Looters:

It's always a pleasure to see you in the audience Colin, and yet again your kind words flatter us. We had a great time playing and are very pleased we made it an enjoyable night for the audience.

The Looters brought their own brand of raunchy rock and pop from the sixties and seventies back to this busy St Albans pub, winning themselves lots of new fans.

It was great to see so many students and others under 25 at a Looters' gig despite the fact that they play nothing made later than 1970's "Bad Case Of Loving You".

These guys know exactly how to get feet tapping and dancers on the floor. From the opening number, Buddy Holly's "Not Fade Away", the music pounds away until the sound becomes almost irresistible.

The line-up of two guitars, bass, drums and the all-important harmonica makes for a lively and entertaining evening as they pump out hit after hit.

Rolling Stones' numbers are well represented with Brown Sugar, Honky Tonk Women, "It's All Over Now" and "The Last Time"; as are the Beatles with the band performing "Get Back" (with some nice harmonica touches from Heff Savage)," Come Together" and "I Saw Her Standing There".

Stephen Pomeroy (lead guitar) was in great vocal form on the Who's Substitute and Lemonrock Editor, Mac Maclaren, joined the group for a lively version of Stealer's Wheel's "Stuck In The Middle".

Other highlights included outstanding renditions of Bad Company's "Can't Get Enough", the Yardbirds' "Heart Full Of Soul" and a bluesy interpretation of John Mayall's "All Your Love".

As usual, solid support was provided by Brian Diprose on bass and guest drummer, Chris Hunt, who has worked with Lonnie Donegan, the Bruvvers and Thunderclap Newman, among others. The Looters have a host of drummers to call upon.

The Looters convinced me and the rest of the punters at the Blacksmiths Arms that they are indeed one of the best pop bands on the current pub circuit.

It was the first time the Looters had played in this cosy East Barnet pub and the regulars were in for a right rocking treat.

The four-piece band got the evening off to a rousing, bluesy start with Buddy Holly's "Not Fade Away", made most famous by the Rolling Stones.

Lead singer Jeff Savage has a rasping, gutsy voice not dissimilar from Mr Jagger's and he's a mean harmonica player too as he demonstrated throughout the evening.

Stones' songs are prominently featured in the Looters' sets and "It's All Over Now", "Under My Thumb", "Honky Tonk Woman" and "Brown Sugar" were all pumped out.

Stephen Pomeroy shares vocal duties with Jeff as well as playing a fine lead guitar. He performed Who numbers like "Substitute" and "I Can't Explain" and showed his guitar prowess on the Yardbirds' "Heart Full Of Soul" and Bad Company's "Can't Get Enough".

Bass player and backing vocalist, Brian Diprose, is a seasoned pro and I loved the riff he provided in "It's All Over Now".

But the quartet's unheralded star is drummer Jim Russell. The previous night Jim was in Bradford working as drummer on Sir Bob Geldof 's current tour. The next night he was due at St Albans Arena and the Looters were sandwiched in between the two gigs because Jim enjoys playing with them. His drumming technique is a joy to watch.

The Looters played two lengthy sets and other highlights included their bluesy interpretation of the Box Tops' hit "The Letter" (complete with great harp playing by Jeff); a Latin-influenced version of "Brown Eyed Girl"; and a rousing rendition of T Rex's seventies' smash "Get It On" which brought the dancers onto the floor.

The Looters also offered something new - their under-rehearsed version of the Small Faces' "Tin Soldier". (It will get better lads!)

Take it from me, the Looters are a band worth queuing for.

Thursday 24 November 2011
Reply from The Looters:

Hi Colin, always a pleasure to see you at a gig and thank you again for your kind words. We had never played Tin Soldier before let alone rehearsed it and only did it as it was requested in the break.... but rest assured it will be in the set from now on and as slick as the rest of the show. Best wishes from us all and hope to see you again soon