Saw This band for the first time on Sat 01 Jan 2014, wow wow wow, the sound was great the singer was great, well done guys for an enjoyable night, i am sure we will be back for more

Thanks Terry, what a great audience, we’re delighted to have your feedback!

(Paul was suffering with a sore throat, so had to hold back!!!!).

We hope to see you again very soon!

Harder and faster with Lord John [The Three Mariners, Bagshot] on Saturday 9 November 2013

Friday night and I was making a journey out into the middle of nowhere (Bagshot - honestly) to see a local Mod band I've been meaning to catch for some time; LORD JOHN.

They were playing The Three Mariners on Bagshot High Street. I've been missing them forever and I wasn't going to this time.

Lord John have taken their name from the famous clothes shop which used to be on Carnaby Street and which provided the wardrobe for the 1960's.

Their music ranges from the classic mod bands of the 60's, through to The Jam and even a bit of 90's Britpop and some classic soul along the way.

Now you can see where the name got chosen and why I drove all that way out into the middle of the country just to see them.

The pub had a clock that went backwards above the bar - it didn't work for me. The time flew.

There was a hard and heavy R 'n B beat running through the evening which really worked and came up from the drums and bass. It spiced up "Parklife" for me - I always liked it anyway.

When I got home I caught a late night compilation of BBC clips from the 1960's and Lord John captured the urgency of the live performances of bands like the Small Faces and The Kinks, which is usually missing on their records.

I enjoyed The Jam's "Start", "A Town Called Malice" and especially "The Butterfly Collector" - the 'B' side to "Strange Town".

I do like "The Butterfly Collector" and they did it well. Written about Soo Catwoman, it was an attack on the Art-school punks of '76/77 and was a cry from the suburbs as well as the first sign that Weller was moving towards 'The Style Council' in sound and ideas.

I really liked Booker T's "Green Onions" - which I heard a month ago on a real Hammond organ thanks to 'The James Taylor Quartet'. Last night it was all lead guitar and beat, which gave the old tune a harder edge, a tougher feel.

"Boom Boom" was great as was "High Heeled Sneakers" (Put on your red dress baby and your high heeled sneakers too)... Martha and the Vandellas "Heatwave" and the original version of "Tainted Love" made up the Soul element of the night.

They ended with a Who medley which included 'Won't get Fooled again' which was also one of the BBC clips. You know, I actually preferred it harder and faster!

That was a good night.

(taken from helpmesortoutstpeters. blogspot. com where it was first published)

Thanks for such a great review Neil!! 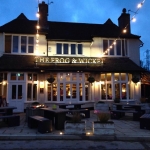 Top night at The Frog gents... with yr main man on his sick bed Darren really filled in like a true pro. Sounded awesome and the crowd loved it. Only stayed for the first set and a few of the second set but it was a thoroughly enjoyable night, see ya again soon J (HTHF).

"Lord John are an excellent Rocking Band guaranteed to get the crowd going, as promoter they are the ideal band as they are reliable and very easy to work with as well as delivering the goods onstage"!!!!! Graham Steel, Events Manager, Jagz, Ascot

Thanks graham we love playing at jagz and really hope to be a regular fixture for you...your sound engineer and staff are first class and we can't wait to come back!