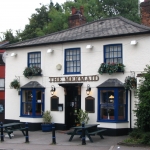 The weather outside was miserable, but come 4pm at the Mermaid, the atmosphere was anything but. The pub was packed to the rafters to see five different acts that would all be performing over the next few hours.

Ferry Cross the Medley kicked things off with their Brian Ferry and Roxy Music covers. It was their first time performing this material but you would never have known with their slick harmonies and fine guitar playing. It was a great start to the afternoon.

Amazing performances just kept on coming, The Faeries sitting on their blanket of love, and Mac and Anja with their tribute to 'Raising Sand' by Robert Plant and Alison Krauss.

Next up were Katie Plus Juan, whose incredible vocals and musicianship took the place by storm. It seems there is nothing these guys can't do, mainstream pop, to souring Spanish flamenco. Caution Horses then took up the reins and kept the party mood going, one customer remarking 'I feel like I've walked into someone's wedding', such was the atmosphere in the place.

Just when we thought proceedings were coming to an end Katie and Juan decided to play an encore of their Co-Jones material keeping the place rocking until 9.30pm.

All in all it was a 5 and a half hour music extravaganza. With each act also forming part of the audience it made for a truly unique and supportive vibe: quite simply the best party in town, which was not only a great success artistically, but also financially for us here at the Mermaid! It just goes to show what can be achieved by putting on a well thought out musical showcase of the local talent we are lucky enough to have here in St Albans.

Thanks to Mac and all those that took part. Can't wait for the next one!

I can't remember ever playing a gig like this - it truly was a very special atmosphere. Thanks to Juan for supplying the PA, and to all the folks who came out on a miserable rainy afternoon to share the love!