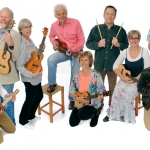 Katies Jumping Fleas were SO good! From the very first moment they appeared on stage they rocked. The energy and sound this band produce is totally brilliant. Also the range of songs they perform seems huge from the very evocative 'Fragile' (by Sting) to real rock numbers such as 'Johnny B Goode'. It is immediately obvious to the audience, from the playful banter between the band members in between songs, that they all really good friends which makes the performance a real pleasure to watch!

We do enjoy ourselves and are good friends that obviously comes across in our performance.

What a great night. The band have so much energy and enthusiasm it really lifts the spirits. You come away with a really good feeling. What a great way to raise money for charity.

We often think that we should be on the National Health!! 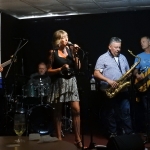 A great night was had by all. Supported by the excellent Fat Walters Band. Dr Shades' Blues Band hit the Stage at about 9.30. With Steve Randall on Keyboards, Steve Austin on Bass, Niall McMahon on Guitar and Bob (Dr Shades) Ayre on drums.

These boys formed a great Blues band each turning in a fine performance, and were completed by the amazing vocalist Chris Lord. She turned out to be a brilliant Blues singer, singing with real emotion. I never thought I would hear a version of I'd Rather Go Blind to rival Christine Perfect, but Chris Lord made the song her own, and I swear she had tears in her eyes at the end of it. Truly wonderful. Among the many other highlights were Stormy Monday and Hoochie Coochie Gal. A great rocking encore, earned Chris and the boys a well deserved Standing Ovation. Let's hope we can see them again soon. They are not to be missed.

Thank you charlie for such a glowing review ! Keep your eyes peeled on lemonrock gig pages for more from 'Dr Shades' in the new year.

Write a gig review for The Maltings Arts Theatre »