Fabulous night at the Cathedral on Friday 16 November 2007

A truly magnificent performance all in aid of Children In Need. Marnie opened with a selection of covers and their originals. The amplified acoustic guitar sounded rich and mellow and Marnie's voice exploited the superb sound system to the full. Her vocal range was impressive, particularly in 'Wuthering Heights' (Kate Bush) and 'Lost And Found' (Marnie & Paul). 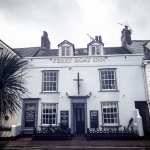 I dropped into The Ferryboat yesterday to catch Marnie's gig and was so glad I did. I was amazed with her vocal range and choice of numbers. The highlight of the afternoon for me was her version of Kate Bush's 'Wuthering Heights', which brought the pub to a standstill and commanded everyone's undivided attention.

The gig was good, the sound was good as was the choice of numbers - not forgetting the guitarist who was note perfect!

Thank you, Marnie, for a very pleasant afternoon.

I've seen Marnie play a couple of times before and was already impressed with the skill and talent of both singer and guitarist.

So I went back to The Bolton to see more of the same, but I didn't get it. Oh no. Marnie have just get better and better. More songs, excellent versions of covers and haunting original melodies all sounding better than ever.

Favourite bit for me was when their original song "Lose Control" (which Lemonrock made MP3 of the week) ran on into "Let Me Entertain You". Peach.

Yes, I admit it - it's impossible to be impartial about someone whose voice can make the hairs on the back of your neck stand up, and believe me, Marnie's voice does it almost every time! In the two-and-a-bit years since I first heard her sing, round a campfire (evocative of Michelle Shocked?), Marnie's repertoire has expanded at a rate to match her vocal voyage of discovery, and with such range clarity and versatility, this could be an incredible journey. As without, so within - Marnie's quest for self-awareness and understanding imbues her lyrics with a depth of meaning and passion of delivery that WILL get her noticed!

Paul, Marnie's latest guitarist/partner, complements these qualities with similar skills of his own. A very accomplished musician in his own right, Paul plays guitar with, at times, great subtlety and sensitivity; at others, real power and angst. His sheer dexterity and stamina in live performances is more than matched by his technical abilities in sound engineering and recording. The latest studio material has brought complexity and maturity to what was, until recently, still rather naive in its freshness and exuberance, but without losing the honesty.

I'm no expert, but I've been photographing/promoting bands and hanging out with musicians since the early 80s, and I've seen and heard dozens of Boy/Girl duos in pubs and clubs during that time. Some will have long since given up the ghost; others may still be doing the same old tired routine; few will have had the talent, belief and determination to take it any further...

I look forward to seeing you play at Glastonbury Festival.

New Year's Eve at the Old Rydon was excellent largely due to the fantastic music from Marnie.

Marnie's voice is amazing and Paul on guitar is spectacular. They complement each other perfectly.

The choice of songs were brilliant with old and new to suit all tastes - really enjoyed their original material.