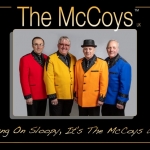 The resurrection of this classic era, and in particular this song, was the brainchild of four professional musicians who were there at the time.All four have excellent pedigrees, having performed for over 50 years each and a mutual love of 60’s music having been involved in the genre from the early 1960’s