Seen these twice at Music Box and Chinnor, very good. Do agree with previous review, we preferred your longer music set too. Still good regardless. Favourite song was She Sells Sanctuary. Thanks for the music.

Thanks for the review Chris.

We’ve been trying out 3x45 minute sets recently as some venues have been asking us to play for longer. Definitely going back to the 2x60 min sets now!

Hope to see you a gig soon

Brilliant Brilliant Brilliant! Just wished they didn't have as many breaks as we didn't want to stop dancing, when they came back on again we missed their first songs as we thought they had finished! But they were very good, and would definitely watch them again if in the area.

Thank you! We had a great time last night.

Please check www.lemonrock.com/midnightrebelband for all our up coming gigs

Superb band last night .gutted it ended so early although stated till 11.30 on lemonrock .I'd of got there lot sooner had I known .these guys were brilliant

Simply fantastic! They took to the stage and the heavens opened up, but not even the rain could stop us standing out front to watch. A good Rock n Roll band! Lead singer was spot on, i will be trying to catch these again sometime. Highlight of the weekend for me!

We had a great day 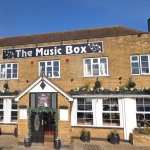 Had the pleasure of watching this band at the weekend, also watched them in Brentford in January. (one of the reasons we came on Sunday) Its great to see a proper rock covers band with their added soulful groove. We spend a lot of time watching live music, and always find ourselves a bit bored with the "party" bands we see. These guys are different altogether, their song selections really stand out. Just wished they had played Duran Duran and Muse like they did in Brentford haha, but we were happy still. By far the best band we have seen in a long time. Well done!

Claire, Saturday 14 May 2022
Reply from The Midnight Rebel Band:

Thanks Claire!!! We’ll do muse and Duran Duran next time 👌👌👌