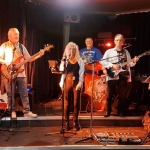 What an absolutely fantastic night, with the new addition of Sherree on vocals it has added another level to the sound, we love playing at this venue and the crowd really got behind us, can't wait to come back next year 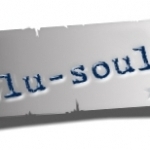 Blu-Soule are a mixture of jazz blues and soul, a lively and friendly 5 piece ensemble of quality well-known on the local circuit musicians that include veteran tub thumper Dave Holmes, Michael Barren on saxophone, Ray Delamare on bass and John Lang on guitar (currently deputising for regular guitarist James Yoeman), while fronting the band is the tiny vortex of vocal energy force that is Tamsyn Berry, whom - it has to be said - possesses a delightful, belting voice and personality to boot.

Starting off their 3 hour set is "Chitlin Con Carne", an easy on the ear instrumental that works nicely in warming up the crowd in this cosy little pub venue and gives us a taste of the band's skills as musicians. Then Tamsyn gets behind the mic bringing some upbeat tempo foot tapping hand clapping fun with "That Man" followed by "Big Bad Handsome Man".

The band's repertoire included a well-blended choice of old standards, such as "I'm No Good", "In These Shoes", "Proud Mary", "I Always Get My Man", "Sing me the Blues", "Stormy Weather" and "Got my Mojo Working", all beautifully delivered with the band harmonising on vocals and stamping their personality all over them.

Sax man, Michael, won me over in no time at all since I'm a sucker for a sensual sax solo and he didn't disappoint and tonight's performance had the vibe of a good old fashioned loose jam session, that's neither set listed or scripted, and it worked a treat.

Bassist, Ray, took over vocals for a self-penned number called "Walking", which as he humorously explained, was about, well... walking!

Guitarist, John, took lead vocals on "Stuck in the Middle with You" and "Black Magic Woman" whilst reminding us what an impressive guitarist he is.

Popping out from serving behind the bar was Hannah Leach, herself a singer, who will be deputising for Tamsyn for the next few months as she takes leave to travel. Hannah sang "Valerie" and "Summertime" and threw a whole new dynamic into the band's sound, but in fact it was the combination of both female vocalists that made this such an enjoyable evening: both possessing vastly different vocals, which, nonetheless, both suited the songs.

What a refreshing change it makes to hear a group who play melodic music in a relaxed and friendly manner and at a really reasonable volume that didn't deafen. Blu-Soule's sound is fun, upbeat and joyous and they really do provide a fabulous night's entertainment.

Thank you for such a great review x 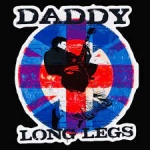 'Britpop', for those not in the know, was the sub-genre of 90's rock that emerged from the slipstream left behind after Grunge, spawning a whole new generation of big attitude guitar bands, most notably Oasis and Blur; the common denominator being the influences from 60's era melodic bands such as The Beatles. It was an exciting time for British music. So the rather oddly named 4 piece Daddy Long Legs, hailing from South East Cornwall, are a welcome shot in the arm on a music scene dominated by classic rock and metal cover bands.

When I arrived on the scene, the band were already a few songs into their set in front of a good crowd that had gathered to the sound of Blur's thumping "There's No Other Way" quickly followed by The Verve's punchy "Lucky Man". With a set covering expected big names, like Oasis, Supergrass, Ocean Colour Scene, Stone Roses and Kula Shaker, to name just a few, Daddy Long Legs proved they aren't afraid to take on a challenge by including in their repertoire songs that lesser competent bands might actively avoid, such as Kula Shaker's "Grateful When You're Dead" along with songs "5.15" and "The Real Me" from The Who's second rock Opera, "Quadrophenia".

The band were clearly having fun too, which always makes for a good vibe and it has to be said that John Ham's sublime guitar work, together with singer Mark Bush's harmonica playing, along with DLL's incredibly tight delivery, sets the bar so high for other bands!

'Impressive' just doesn't come close to describing such class, and, as one nearby punter said to me, "Where the hell has a quality band like this been hiding?!" - my thoughts exactly!

Thanks for taking the time to come and watch us Ellie, and for your review, we had a great evening at are really looking forward to a few more gigs in the city in the near future !!