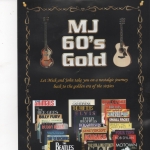 MJ60'S Gold are Micky Groome and John Knowles Micky Groome (born Michael John Groome, 20 March 1951) is an English bassist, guitarist, vocalist, songwriter, and producer. John is a musician who has been performing for over 40 years. He started playing guitar when he was 11 and his first gig was at an Italian wine bar in Ealing, West London in 1976. He plays a mixture of genres including pop, blues, reggae and classic rock. In 2017 he released a new album called Uncovered with a selection of his own song.

Previous gigs (2) »
Export gigs as an iCalendar (.ics) file for Apple, Google or Yahoo Calendars.Note: some iCalendar implementations incorrectly cache your calendar. To prevent old calendars showing on other sites or apps, replace the URL in your diary site or app with the URL shown - this URL changes when your calendar content changes, so your feed will always be up to date if you always manually replace the URL.
Export gigs as a CSV file for OpenOffice Calc, Microsoft Excel or other spreadsheet.