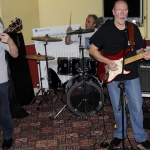 We saw Jigsaw and Molly Malones in Hitchin and they were so good. Everyone was singing along and getting up to dance. Can not fault them at all. I am definitely going to see them again! 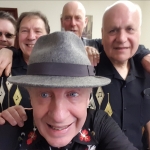 My partner and I have recently taken over the pub and have been trying out different bands to give customers a wider choice of music.

'Just For Kicks' were booked for Friday the 23rd of March. Unfortunately, we had a charity event going on for one of our regulars around the corner, so - needless to say - I was expecting a quiet night... how wrong I could be!

To say the band were good would be an understatement! They 'drew in' customers and 'kept in' the ones who were already there, which is GREAT for business. The music was addictive and you couldn't help but dance and sing along. When the band started playing "See You Later Alligator" the room erupted into action and some rather impressive dancing was seen on the dance floor!

The banter the band kept up with customers was brilliant and they certainly got into everyones good books when they played "One Step Beyond" by Madness even, though it wasn't on their playlist.

As I posted on our facebook page on the night, "You know you have an excellent band on when you have customers calling friends demanding that they get down to hear them!"

I'm still getting messages from people who were there asking when they will be back, which speaks for itself.

Just For Kicks earn themselves ten out of ten and I'm looking forward to having them back!

What a great night the boys from Just for Kicks had at Molly Malones.

The audience we had were brilliant and Ben and Vanessa make a great landlord/lady.

We can't wait to come back again 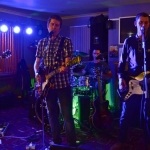 Having just had a very heavy snow fall that afternoon we were unsure if we should venture out, but we were so glad that we did and I'm sure that view was shared by all at Molly's that night.

I've now seen these guys play a few times and each time they just seem to get better and better and great to hear a different set list each time rather than the same over and over again as you often get with bands.

The four members gel together to provide a very polished, clean crisp sound which is an absolute pleasure to listen to and with such a diverse range of songs from Hendrix to Bowie to Kings of Leon, there was something for everyone and they very quickly had the excited crowd up on their feet dancing and singing along, what a great way to kick start Christmas.

But don't just take my word for it, get along and watch them live, you won't be disappointed.

Looking forward to seeing you again very soon guys and good luck in 2011.

Thanks for your nice feedback Glyn - very much appreciated. We always enjoy playing at Molly's and that night was no exception, despite the bad weather. Hopefully back there in Feb 2011. See you soon, Tim, Nick, Dave, Ian

Energetic, Authentic and Talented The x-certs on Saturday 4 September 2010

Having seen the x-certs many times before, this has to count as one of their finest gigs to date. They delivered a fantastic blend of 'Indie ' rock with some real surprises, including a Ska version of Kraftwerk's 'The Model'. Their powerful rendition of Bowie's 'Queen Bitch' always goes down well and sounds spookily authentic whilst the Clash's 'London Calling' is always an energetic crowd pleaser with the bulk of the audience enthusiastically joining in as Ian, the band's singer and rhythm guitar player belts out yet another classic.

Special mention has to go to Tim on lead guitar, whose talent is beyond doubt and always stuns me into silence as he produces yet another perfect lead break, usually so close to the original there's no discernible difference. He produces a knockout blow by whacking us all round the face with an emotionally charged solo in the Hendrix masterpiece 'All Along The Watchtower', which to me seems note for note perfect.

The bass and drums were perfectly mixed, with Nick's Fender and Dave's rock solid drumming creating the perfect backdrop to a superb two-set gig.

If you are looking for a band with energy and talent look no further. Their enthusiasm spills out of the music and into the audience who that night lapped it up like milk from a saucer.

Tuesday 7 September 2010
Reply from The x-certs:

We are very grateful for your kind comments Mark and thanks for taking time to write us a review. It was a great turnout and a great atmosphere and we really hope to back at Molly's again soon - its always good to play in Hitchin! All the best, Tim, Ian, Dave, Nick

A very professional and polished performance from 4 lads who are all excellent musicians. The choice of songs was excellent and at no time did they seem out of their depth. The audience certainly enjoyed them and wanted more which was indicative of how popular they were on the night!

However, this band can get even better! How?

1) Introduce one or two classic rock slower numbers. A little more variety will I am sure be readily appreciated.

2) Do one or two more rocky numbers e.g. Whisky in the Jar by Thin Lizzy was great but what about The Boys are Back in Town as well.

3) Some of the songs are quite short - what about one or two longer tracks. In the first half of the show you led from one track into another - do this more often.

4) Give the audience a bit of feedback on the band e. g "You can find us on the Internet site www.lemonrock.com" and where and when your next gigs are.

5) Have a go at playing a rock classic e.g. "Stairway to Heaven" or "Freebird."

The x-certs are certainly one of the best pub bands on the circuit and they have the potential to get even better!

Monday 6 September 2010
Reply from The x-certs:

Many thanks for taking the time to write a review for us - we always appreciate feedback and constructive criticism from anyone who has seen us. We aim to strike a balance between the music we love and the music that people want to hear. Some of the songs you suggest are great tunes but are very difficult to sing (not many people are blessed with the same vocal range as Robert Plant). We're always happy to have a go at anything but we won't put something in our set if we feel that we can't do it proper justice. More Thin Lizzy is a strong possibility though! Best wishes, Tim, Nick, Ian, Dave